A photograph of the Elephant & Castle Shopping Centre and a Tower Bridge snow globe are among the items representing Southwark in 2014 which have been buried in a time capsule on the site of a new skyscraper. 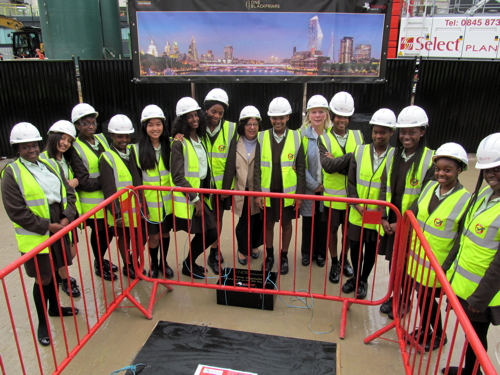 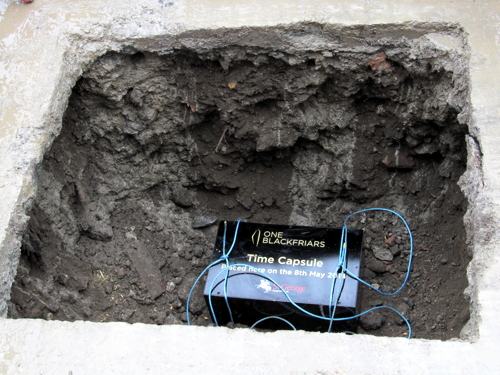 Pupils from Notre Dame RC Girls' School this week lowered the time capsule into the ground at the construction site of the new One Blackfriars skyscraper to be built at the north end of Blackfriars Road.

The 15-year-old girls had taken part in the Southwark Young Pilgrims project during the Easter holidays. SYP trains local teenagers to provide tourist information to visitors to the borough.

Items in the time capsule included leaflets for local tourist attractions such as the Clink Prison Museum and HMS Belfast, as well as a booklet about Borough Market and a Tate Modern exhibition programme.

The pupils also included photographs of themselves and their school, as well as the Elephant & Castle Shopping Centre and roundabout.

The time capsule, which has been buried under the proposed new public space at the foot of the new skyscraper, is intended to be unearthed in 25 years' time.

"The capsule was filled with items that the students who had taken part in the Pilgrims programme during the Easter holidays felt represented Southwark.

"They were given a tour of the site, a talk about the project, watched a 3D video of how the building will come to life, saw models of the building in the marketing suite and were delighted with their goody bags."

The time capsule was a joint initiative by developer St George and construction firm Laing O'Rourke.

The One Blackfriars scheme includes 274 luxury homes as well as a new hotel to be operated by the owners of St Ermin's in Westminster.

Earlier this year the developers opened a sales office in Dubai.