Canon Bruce Saunders received a standing ovation from the congregation of Southwark Cathedral on Sunday morning as he marked his retirement as sub dean and canon pastor. 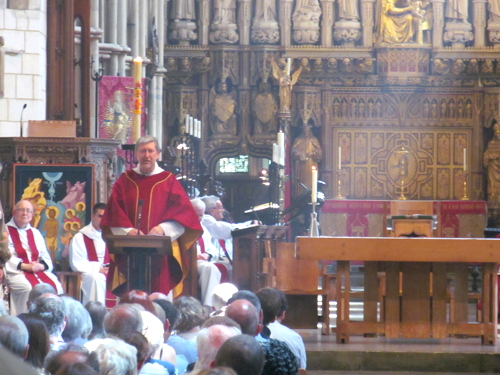 Sunday morning's Pentecost choral eucharist ended with presentations to Canon Saunders and his wife Ros from staff and volunteers at the cathedral.

Guests at the service included Revd Jacob Frode Knudsen, sub dean of Bergen Cathedral in Norway with which Southwark Cathedral has a special link, and his wife Karen.

Also present was Dame Sylvia Morris, former headteacher of Cathedral School and Bob Skelly, a past Mayor of Southwark who served as a trustee of the cathedral's education centre.

Canon Saunders has been on the cathedral staff for 17 years – becoming the longest-serving member of the clergy – and has been responsible for pastoral care in the cathedral parish for more than a decade.

In recent years he has also been minister-in-charge of St Hugh's Bermondsey, overseeing the project to rebuild the Crosby Row church which was completed earlier this year.

He added the role of sub dean to his responsibilities as canon pastor in 2011.

He has also worked closely with Cathedral School in Redcross Way as a governor and chaplain and is well-known to pupils and staff.

Canon Saunders has been chair of the cathedral's award-winning education centre, which welcomes more than 10,000 children a year to Southwark, and overseen the work of Sunday schools and youth groups.

In the wider community he has served as a director of the Bankside Residents' Forum.

His early music choir, New Renaissance Voices, has often given concerts at the cathedral.