Last month homeless people supported by the St Mungo’s Broadway charity performed their own play at the Young Vic in Waterloo. 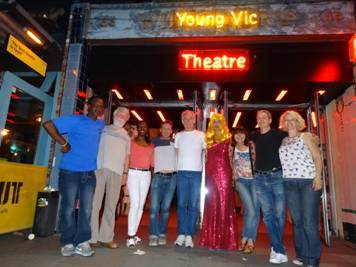 The group held weekly rehearsals at the charity's wellbeing days at the Wellbeing Centre in Clapham and gave seven performances of the play – The Sound of Yellow – to an audience of supporters, friends and family at the end of July.

One resident from a St Mungo's Broadway semi-independent project in Kennington is James, who played a key role in the performance (pictured fourth from right).

He said: "The Wellbeing Centre is brilliant for my self-esteem and confidence. If I thought I would be in the Young Vic, thinking back one year ago, I would thought and said 'No way'.

"The social aspect of the Wellbeing Centre really does help. Thank you.

"I only ever went there [the Young Vic] before to have a wash and had never been in to see a play, let alone be in one."

Another of the group's actors, John, said: "Ten weeks have flown past. I attended a taster workshop at the Wellbeing Centre via a project to get the homeless and marginalised into theatre.

"We developed a piece based around the Conference of Birds play which had evolved into the Valley of Astonishment recently having a run at the Young Vic. But ours is called The Sound of Yellow.

"I am grateful to St Mungo's Broadway and the Young Vic because it's their hard work, diligence, commitment, and above all patience that brought us all to this big white tent in a theatre on a street called The Cut."

Jeanette Rourke, who runs the Wellbeing Days, said: "We were delighted be involved in the Young Vic workshops over the last ten weeks and the performances at such an iconic theatre have been the cherry on the cake for all involved.

"The whole project has really bought out some really positive changes within the group and I'd like to thank the Young Vic for all their support for our clients with this project."

Weekly rehearsals and workshops for the community show took place at St Mungo's Broadway Wellbeing Centre in Clapham. The sessions are just one of a range of programmes at the centre's weekly Wellbeing Days including; clay-making, acupuncture, art workshops, reiki, and sessions from Streetwise Opera and Omnibus.