A watercolour of Blackfriars Railway Bridge is one of two Thames-related paintings to be displayed on posters at river piers and tube stations around London. 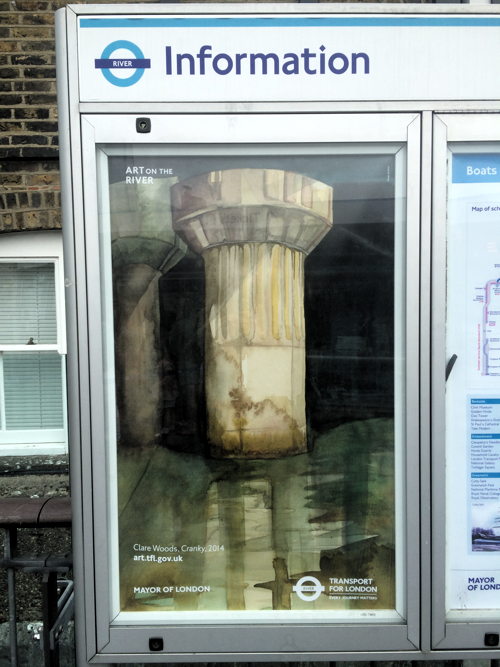 Transport for London has commissioned two paintings from Clare Woods as it expands its long-running Art on the Underground programme to the River Thames.

The artwork will be reproduced and exhibited at eight piers including Bankside Pier and Festival Pier and across the London Underground network.

Woods was inspired by classic posters from the London Transport Museum archive as well as depictions of the Thames in the Tate collection but opted to depict the river as seen from the water rather than from the banks.

"The view of the city and the river banks, the muted feel to the sound and the general chaos of London are all elements of travelling on the river," said Clare Woods.

"I was very much influenced and interested by the huge tidal range, in some places 8 metres, and what this drop in tide exposes.

"The clearly-layered history of the river bank structures, from Brunel's SS Great Britain launch site to medieval pillars and Georgian steps and arches. It is a whole other part of London that's unseen by most people. I wanted to paint where these human structures meet the river but from the river's point of view."

The new Art on the River commissions will be on public display throughout September during the month-long Totally Thames festival.