A new movie based on the long-running TV drama Spooks was released on Friday - and it makes use of lots of SE1 filming locations. 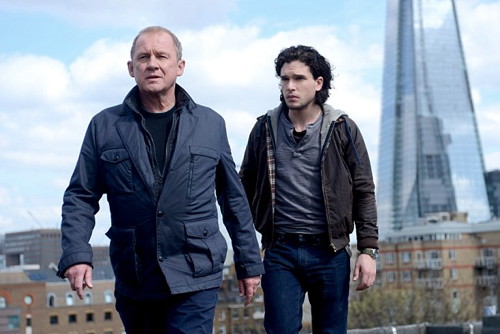 Babington House in Redcross Way features in the Spooks movie

The spy thriller stars Kit Harington and Jennifer Ehle, alongside mainstay Peter Firth who has played Sir Harry Pearce, the head of counter-terrorism, since the series began.

"South Londoners have grown to love the maker of Spooks, Kudos productions," said Andrew Pavord, director of FilmFixer which manages bookings from film crews on behalf of Lambeth and Southwark councils.

"They are known for using local restaurants and cafes, instead of a massive on-street catering set up."

Mr Pavord added that the Kudos approach to location filming has been impressive throughout the life of Spooks and other productions.

"The actors are rehearsed and fully made up before leaving the production headquarters.

"When a Kudos crew pulls up to film, it's in a small vehicle, parked very briefly, while the action is shot quickly on only essential kit.

"They don't use a load of extras, and often the actors are mingling with ordinary pedestrians, unaware they are in shot.

"Then everyone gets back in the vehicle and moves rapidly on to the next scene. It's a method I'd like to see more of, frankly."

For the new movie, FilmFixer helped to arrange locations in Southwark, Lambeth and Camden in April and May last year.

Look out in particular for the action on Waterloo Bridge In the scenes, agents on the bridge communicate with a sniper on the roof of the National Theatre.

The scenes at Babington House in Redcross Way involve Kit Harington climbing out onto the roof, then down to a balcony.

The ten series made a habit of weaving London landmarks into the background of action-packed scenes – and the movie is no different.

Look out for the Shard, the Millennium Bridge, London Bridge, Rotherhithe and the More London estate.

Andrew Pavord added: "Particularly given that the filmmakers Kudos have been based in Southwark for so long – we are really proud to have been involved in helping out with Spooks locations.

"We're pleased that the new movie once again uses our riverside locations as a rich canvas for the action.

"Another Kudos TV drama The River was based in Bermondsey last summer, using the same low-key, efficient set up to film."

In the new movie Spooks: The Greater Good Harry Pearce disappears soon after a terrorist escapes from MI5 custody. The Kit Harington character must find out what happened, while at the same time London is under threat of attack. The conspiracy uncovered spans Vietnam to the Mediterranean.