The New Waterloo Dispatch - a 'ceremonial interpretation' of how the news of the Battle of Waterloo reached London - came to Tower Bridge, Waterloo Bridge and Westminster Bridge on Sunday. 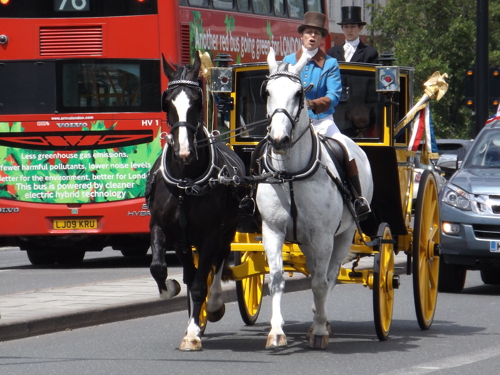 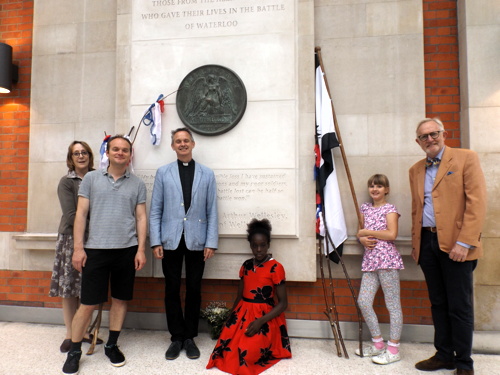 Representatives of St John's Waterloo, the Waterloo Festival and the local Waterloo 200 committee laid flowers at the new memorial at Waterloo Station on Sunday

The 2015 event took advantage of several river crossings that didn't exist in 1815 including Tower Bridge and Waterloo Bridge.

See www.thenwd.org.uk for full details of the event.

In 1815, news of victory at Waterloo brought in the Dispatch was reported in The Times the following morning Thursday 22 June, four days after the battle.

The dramatic late night news did not change the front page which still had advertisements.

The top front page advertisement was for an exhibition by the Society of Painters in Oil and Water Colours which as the Royal Watercolour Society is now based at the Bankside Gallery.

Also on the front page is an offer of twenty shares in Southwark Bridge which opened four years later in 1819.

Inside the paper, opposite the Waterloo report, there is notice of a wedding at St Mary Lambeth.

The back page has an advertisement for an auction of a house 'at Mill-stairs near Dockhead'. The site is 'between Mr Reed's premises and Mr Jones's wharf'. An attraction includes 'an uninterrupted view of the river Thames and the Kentish-hills".

Copies of the historic edition of the newspaper have been reprinted in Belgium to mark the 200th anniversary of the battle.