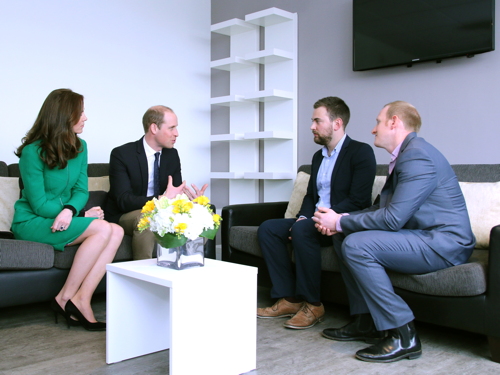 The royal couple have been carrying out a number of engagements with a focus on suicide prevention and support for those bereaved by suicide.

The Duke and Duchess met Jonny Benjamin, who returned to St Thomas' where he was cared for after he contemplated taking his own life on Waterloo Bridge in 2008, and Neil Laybourn, the man who talked him down.

After receiving help, Jonny launched a social media campaign called #FindMike, with the charity Rethink Mental Illness, to find the man who saved him in order to offer his thanks. The campaign succeeded and Jonny was reunited with Neil.

Jonny believes that if he had received help for his mental health challenges earlier in life he would not have reached his crisis point.

Dame Eileen Sills, chief nurse of Guy's and St Thomas' NHS Foundation Trust, said: "It was an honour to welcome the Duke and Duchess of Cambridge and Jonny and Neil to St Thomas' Hospital today.

"Mental health is a huge priority at our trust, and we're so supportive of the positive awareness that is being raised.

"In the eight years since Jonny was brought to our A&E department, we have established a dedicated team of mental health professionals to ensure our patients are kept as safe as possible, and receive the most appropriate care.

"Alongside their work in A&E, they also work closely with community-based mental health services and offer psychological care for families of people with mental illness."

The Duke and Duchess and Prince Harry are making mental health a major focus of their work in the year ahead.