Four police officers spent Friday afternoon close to the Tower Bridge Road office of Bermondsey & Old Southwark MP Neil Coyle after he claimed that a protest in support of embattled Labour leader Jeremy Corbyn was to take place during his weekly surgery. 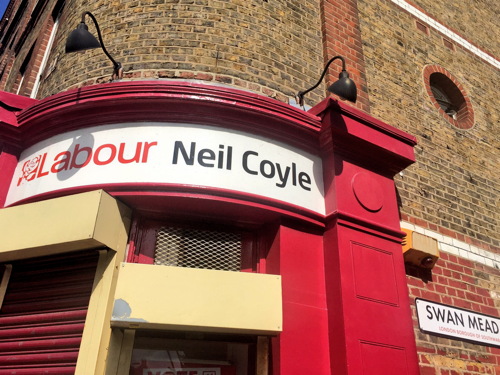 Earlier this week Neil Coyle wrote a furious email to shadow chancellor John McDonnell – published on the Guido Fawkes blog – complaining that "a protest will be happening outside my office whilst I try and help constituents in my surgery on Friday".

Coyle claimed that McDonnell had encouraged supporters of Jeremy Corbyn to protest outside the offices of MPs who were against the party leader.

On Tuesday morning McDonnell had explicitly urged Corbynites not to protest outside MPs' offices.

When Friday afternoon arrived – other than police, reporters, photographers, TV camera crews and members of Mr Coyle's team – there were only five people assembled outside the MP's Tower Bridge Road office: four of them supporters of Jeremy Corbyn and one woman who had recently joined the Labour Party in order to back 'anyone but Corbyn'.

The pro-Corbyn contingent denied that they were there to protest but simply wanted to talk to their MP about his decision to resign from Labour's front bench team, and to urge him to participate in a public meeting to discuss the way forward for the Labour Party locally and nationally.

Afterwards Neil Coyle told the SE1 website that he had been warned that up to 70 people were likely to protest outside his office.

Listen to our full interview with Neil Coyle below.