The bells of Southwark Cathedral were blessed and rededicated last week before being returned to the tower after restoration. 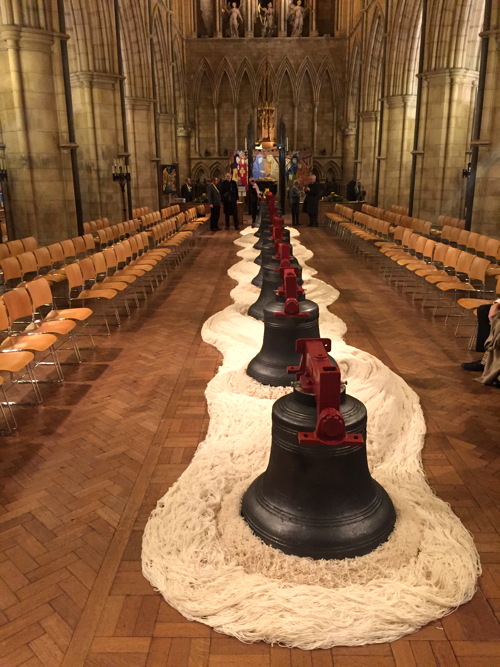 The cathedral's bells – which normally ring out over Borough Market and its environs on Wednesdays and Sundays – have been silent since last July when they were removed for restoration.

Last Monday the Bishop of Southwark, the Rt Revd Christopher Chessun, dedicated, baptised and blessed two newly re-cast bells, which have recently returned from the foundry, and re-dedicated the other ten bells.

One of the re-cast bells was dedicated in memory of Colin Slee OBE, former Dean of Southwark, and given the name ‘Nicholas’ (of which ‘Colin’ is a diminutive) and the tenor bell was dedicated in memory of James I of Scotland and his descendants – and also those who died in World War I – and given the name ‘Andrew’ for St Andrew, patron of Scotland.

The Dean of Southwark, The Very Revd Andrew Nunn, said: “This is a wonderful day for the cathedral and sees the end of more than a year’s work from when this ‘once in a generation’ project was started. We are grateful to all the donors, whether large or small, private or corporate, named or anonymous, that have made this work possible”.

The casting of the new tenor bell – at Taylor's of Loughborough – was live-streamed on Periscope by the cathedral bellringers last September:

LIVE on #Periscope: Casting of the new tenor for Southwark Cathedral https://t.co/w17aUEE0SC