A 1607 document recording the burial of William Shakespeare's brother Edmond - in the church that is now Southwark Cathedral - has gone on show in a new exhibition. 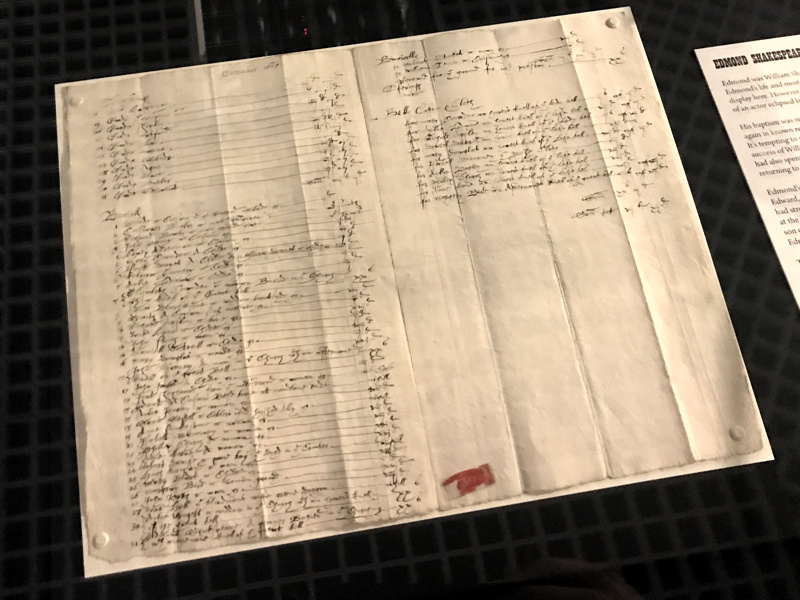 Life on the London Stage – at the London Metropolitan Archives in Clerkenwell – uses documents, prints, and photographs from its extensive collection to highlight some of the people involved in London theatre from the the days of Elizabethan playhouses on Bankside to the 20th century.

"Some surprising finds and extraordinary stories have come to light during the LMA's research for 'Life on the London Stage', including how Edmond Shakespeare, of whom many of us know nothing, followed his older brother to London to work as an actor," said Graham Packham, chairman of the City of London Corporation's culture, heritage and libraries committee.

"Visitors will also learn about the houses owned by Nell Gwyn, one of London's greatest rags-to-riches stories; how music hall star, Marie Lloyd, alarmed the authorities with her routines; and Kenneth Williams' advice about how he dealt with school bullies."

The exhibition features the monthly bill for December 1607 of the parish of St Saviour (now Southwark Cathedral), including the line on 31 December recording the burial of Edmond Shakespeare and that the occasion had been marked by a "forenoon knell of the great bell".

It is often speculated that William Shakespeare paid the 20 shillings fee to have the church bell rung for his brother's burial.

The exact location of Edmond's grave is unknown but he is commemorated with a stone in the quire of the cathedral.

The LMA exhibition includes several further items of SE1 interest, including theatre bills for Astley's Amphitheatre in Westminster Bridge Road, an 1809 picture of the Royal Circus in Blackfriars Road and a playbill from the Elephant & Castle Theatre in New Kent Road.

Two other figures associated with the playhouses of Elizabethan Bankside also figure in the exhibition – Edward Alleyn and Richard Burbage.

The exhibition continues until 6 December; admission is free.