Police are appealing for information and witnesses following a shooting in the Geraldine Mary Harmsworth Park by the Imperial War Museum. 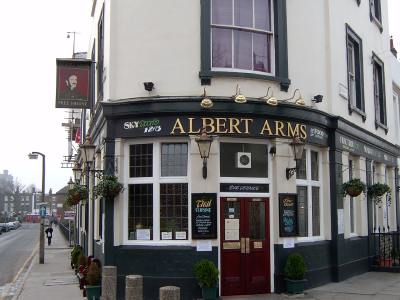 Albert Arms">
The victim collapsed outside the Albert Arms

At approximately 5.15pm on Friday 23 April the 21-year-old male victim was walking along Geraldine Street. He walked through the doorway into the park towards the basketball court, which is about halfway along the street. As soon as he was through the doorway he was shot in the face.

The victim managed to make his way back out of the doorway onto Geraldine Street, into St George's Road and then into Garden Row, where he collapsed outside the Albert Arms pub.

He managed to call the emergency services whilst making his escape. He was taken to hospital where he remains in a stable condition.

It is believed that the male suspect, who is described as a light-skinned black man, approx 20-years-old, approx six foot tall, wearing a two-piece blue tracksuit with a blue baseball hat, escaped with approximately two other male youths through the park.

The Met's shootings investigation team at Jubilee House, Putney is investigating this incident and asks anyone who witnessed the shooting or anyone who has any information to call the incident room on 020 8785 8580. Or, if you wish to remain anonymous, please contact Crimestoppers on 0800 555 111.

It is the second time in a fortnight that the park has made the news, following an incident in which Old Vic artistic director Kevin Spacey was robbed of his mobile phone in the park.