A controversial scheme to build nearly 1,000 homes as part of a redevelopment of the Elephant & Castle Shopping Centre and London College of Communication has been rubber-stamped by Sadiq Khan's deputy mayor at City Hall. 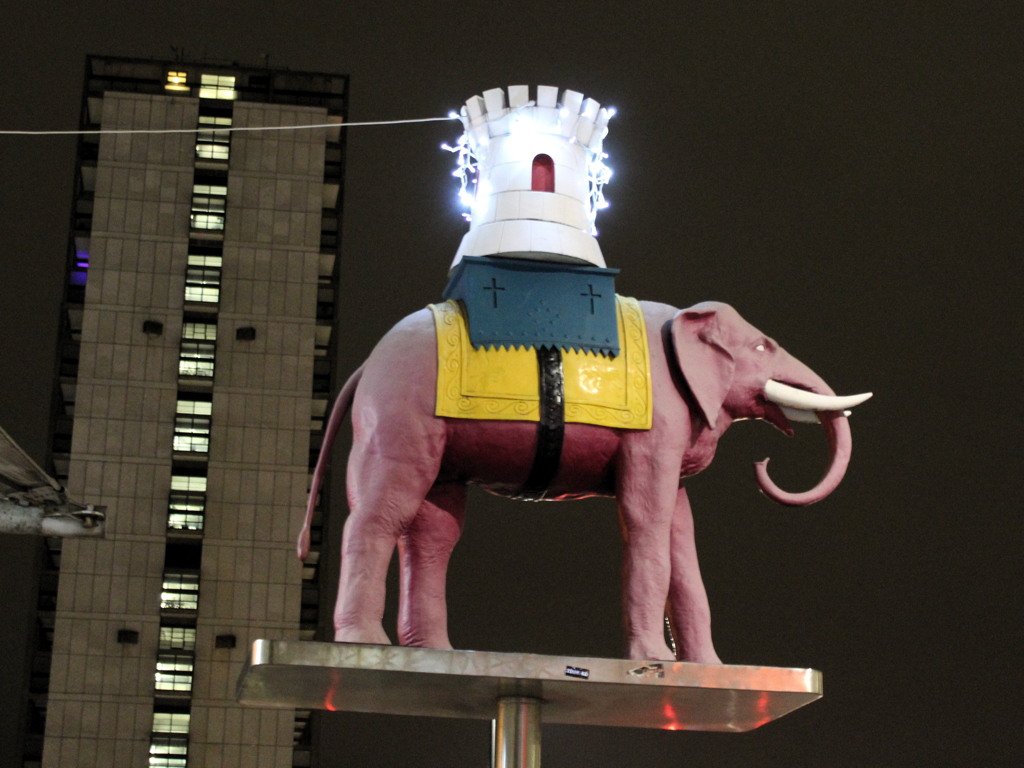 2018 could be the final Christmas for the Elephant & Castle Shopping Centre, which has dominated the junction for more than half a century

Southwark councillors resolved to grant planning permission for Delancey's plans for nearly 1,000 build-to-rent homes – and new premises for the London College of Communication – back in July.

The size of the scheme meant that the case was then referred to the Mayor of London who had the power to 'take over' the application or allow Southwark's original decision to stand.

The application was finally considered by Jules Pipe, deputy mayor for planning, at a behind-closed-doors City Hall meeting on Monday afternoon.

Mr Pipe endorsed a report from Greater London Authority planning officers who concluded that there were no sound grounds for the use of mayoral powers in this case.

Mayor of London Sadiq Khan recused himself from making a decision on the scheme – which includes a new ticket hall for Elephant & Castle Underground Station – as he is also chair of Transport for London which will be a party to the finalised legal agreements for the development.

A City Hall spokesman said: "This development will include nearly 1,000 new homes for rent – of which 35 per cent will be at social rent or other genuinely affordable levels – as well as community space, leisure facilities, offices, an enhanced college campus, and improvements to the nearby Underground station.

"By working with the developer, the council and local ward councillors, City Hall has secured an unprecedented level of support for traders affected, with their rents now capped below market rates for 15 years, and has got the level of rents in the affordable homes down even further.

"City Hall has used the planning powers available to their fullest extent to make sure these plans represent a good deal for the local area and, having considered all the evidence available, has decided to approve this application."

Lambeth & Southwark London Assembly member Florence Eshalomi said: "From an initial glance, City Hall's intervention in this process appears to have seen some positive strides in securing more genuinely affordable housing for the community and valuable improvements to the public realm.

"However, I am yet to receive an exact breakdown of how far the scheme will benefit local people. Adding to this, I am still unconvinced that the level of support being pledged to the Latin American business community is sufficient.

"I will be following up these issues with the Mayor to gain his assurances that the newly approved plans will not come at the cost and fragmentation of the Elephant and Castle community."

Cllr Johnson Situ, Southwark's cabinet member for growth, development and planning, said: "We have always pushed for as much affordable housing as possible on this site and committed to do everything we can to support the existing traders.

"We welcome the Mayor's decision and the enhancements announced by City Hall, which will mean increased support for traders.

"This is a complex scheme that will create a vibrant, new town centre, which is a key part of the wider regeneration of Elephant & Castle bringing new homes, jobs and opportunities to the area.

"We will continue to respond to the concerns raised by some local residents about aspects of the regeneration, and work with our residents, businesses, local councillors and Delancey to ensure the new development works for local people. For the businesses it has been agreed that 10 per cent of the retail space across the sites will be affordable and Delancey has guaranteed a £634,000 tenant relocation fund to support traders. The council is currently working with traders on the principles that will inform this funding.

"In addition, the council itself will provide new affordable retail at Perronet House and Arch Street, in addition to the affordable space already being provided by Lendlease and Delancey's phase one developments.

"We know this is still a very difficult time for people directly affected by this significant change and the council will continue to work with the businesses to support them and help them not just find a new home but also grow and thrive in it."

Protests are expected outside Southwark Council's Tooley Street offices on Wednesday evening ahead of a planning sub-committee meeting where proposals for temporary retail space in shipping containers to be installed on Castle Square in Elephant Road are due to be considered.

At the end of last month more than 250 people attended a fundraising event for a legal challenge to the decision to approve the scheme.

Jerry Flynn from Elephant Amenity Network said: "The local community has already gained more social housing from the redevelopment and a better deal for traders – but it is not enough. We must continue the united campaign of local people, councillors, students and traders to secure the homes and local businesses the Elephant desperately needs.

Tanya Murat from Southwark Defend Council Housing added: "The councillors on the planning committee should never have approved this scheme. We are going to fight it all the way, using every method at our disposal including legal action and political pressure".

Latin Elephant founder Patria Roman-Velazquez said: "We are glad to keep joining efforts with the traders, residents and many local groups, all united to campaign for a fair, inclusive and transparent scheme that fits the needs of the community in Elephant & Castle.

• Read the GLA stage 2 report on the planning application

• In October the shopping centre was turned down for listed status and the Government issued a five-year 'certificate of immunity' to block any future attempt to halt demolition of the building.