Andrew Martin, author of The Necropolis Railway, was guest of the local history reading group meeting at Waterloo Library. 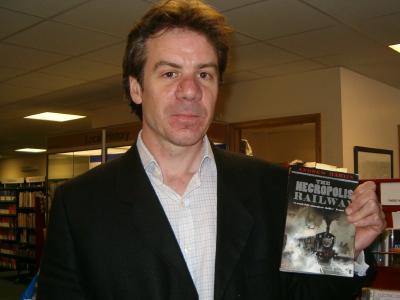 He discussed his novel which is named after the secret railway station for the dead which still exists nearby in Westminster Bridge Road. The story is set there and among the streets and viaducts of Waterloo and Nine Elms in 1903.

A young man comes from Yorkshire to work on the railway and is sent to join a team on the Necropolis Railway taking the dead and their mourners to Brookwood cemetery. Many dead of SE1 are buried there and St George's Borough High Street even has its own plot.

The well-received book, which has a myterious disappearance, was published in 2002 and has recently been reissued as a paperback.

Lambeth Archivist Anna Robinson welcomed the author for the dialogue held during the lunchtime meeting, part of the Lambeth Voices festival and Adult Learners Week.

The monthly history reading group, now called 3rd Monday, meets at the Lower Marsh library on the third Monday of each month at 1pm.
• The Necropolis Railway by Andrew Martin is published by Faber (Ł6.99).