Petitions have been launched calling for the statue of Thomas Guy - founder of Guy's Hospital - to be removed from the grounds of the hospital and medical school at London Bridge. 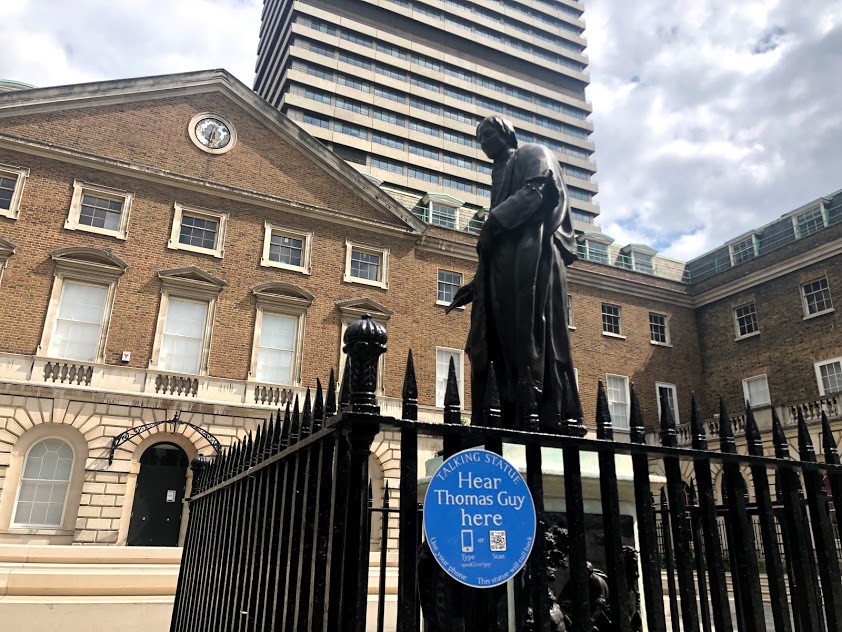 Following the toppling of slave trader Edward Colston's statue in Bristol last weekend and the removal of Robert Milligan's statue at West India Dock on Tuesday, the spotlight has fallen on other public memorials to figures with direct or indirect links to the slave trade.

Mayor of London Sadiq Khan has launched a Commission for Diversity in the Public Realm to consider murals, street art, street names, statues and other memorials.

Thomas Guy's fortune came from the South Sea Company which was involved in the slave trade, and his statue in the courtyard of Guy's Hospital is now the focus of controversy.

The statue is owned by Guy's and St Thomas' Charity and is part of the Guy's Campus of King's College London.

Thomas Guy has been included on a 'Topple the Racists' map of statues produced by the Stop Trump coalition.

Two petitions calling for the statue to be removed have been launched. One, with nearly 200 signatures, was started by Yannick Wognin, who describes himself as a Black African second year student at King's. A second petition, started by Ruth Adams, has less than 50 signatures.

Another petition, started by two first-year undergraduates calling on King's College London to drop Guy from the name of the campus, has gained nearly 5,000 signatures.

Keiran Boyle, chief executive of Guy's & St Thomas' Charity, said: "We fully support a review to ensure that our public realm better reflects the diversity of our city, including conversations about whether historical statues with links to slavery should be removed, replaced or better contextualised.

"We are working with Guy's and St Thomas' NHS Foundation Trust and King's College London to agree a way forward.

"As an urban health foundation based in Lambeth and Southwark, we see the pervasive and harmful effects of structural racism on our own doorstep.

"Black people have worse health outcomes, and this inequality is one of many ways racism permeates our society. We stand in solidarity with our partners, colleagues and communities."

A spokesperson for King's College London said: "We welcome the Mayor of London's commission announced yesterday and will work with our partners at the trust and the charity to consider the right way forward.

"We are committed to playing our part in fighting racism and racial discrimination and recognise the strength of feeling shown by our own community of students and staff and across the city."

Thomas Guy's statue was restored just a few years ago as part of the work to create Science Gallery London.

Mayor of London Sadiq Khan said: "Our capital's diversity is our greatest strength, yet our statues, road names and public spaces reflect a bygone era. It is an uncomfortable truth that our nation and city owes a large part of its wealth to its role in the slave trade and while this is reflected in our public realm, the contribution of many of our communities to life in our capital has been wilfully ignored.

"This cannot continue. We must ensure that we celebrate the achievements and diversity of all in our city, and that we commemorate those who have made London what it is – that includes questioning which legacies are being celebrated.

"The Black Lives Matter protests have rightly brought this to the public's attention, but it's important that we take the right steps to work together to bring change and ensure that we can all be proud of our public landscape."

In a 2010 paper on the founding of Guy's Hospital, Roger Jones of King's College London wrote: "It was ... Guy's investment in the South Sea Company which led to a multiplication of his fortunes because, unlike many of those who were ruined by the collapse of their stocks during the South Sea Bubble crisis, Guy sold at the top of the market and records in his personal ledger between April and June 1720 indicate that he sold a little over £50,000 worth of South Sea stock for over £250,000 (approaching £400 million at today's prices).

"At the end of 1720 the unmarried Thomas Guy, aged 76, was extremely wealthy, with a fortune sufficient to build Blenheim Palace or a dozen of Hawksmoor's City churches."

Jones wrote: "Guy's last will and testament was clear about the purpose of his endowment, which was to build a hospital able 'to receive and entertain therein 400 poor persons or upwards, labouring under any distempers or disorders, thought capable of relief by physic or surgery but who, by reason of the small hopes there may be of their cure, or the length of time for which that purpose may be required or thought necessary, are or may be adjudged or called incurable and as such not proper objects to be received into or continued in the present hospital of St Thomas'.

"My mind is that they receive and entertain lunatics, adjudged or called aforesaid incurable, not exceeding 20 in number at one time.'"

As well as the statue in Guy's Courtyard and a further memorial in Guy's Chapel, Thomas Guy's birthplace is also noted with a plaque near the site of St John Horsleydown church in Tower Bridge Road.