A new design competition inviting architects, landscape architects, designers and artists to enhance the riverside walk at Butler's Wharf has been launched. 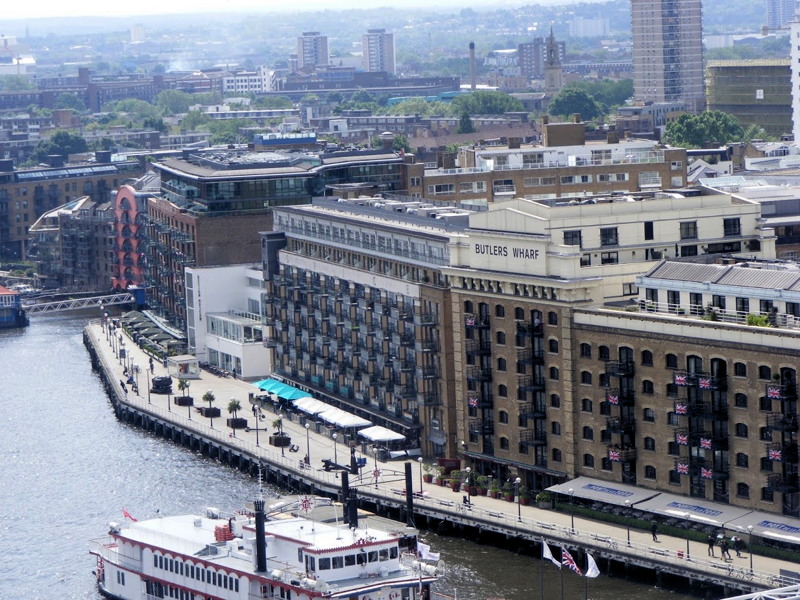 The jetty viewed from the top of Tower Bridge

The competition is being run by the London Festival of Architecture and Butler's Wharf Riverside Trust.

The judging panel includes Sir Terence Conran who played a crucial role in the 1980s reinvention of the warehouses of Shad Thames.

The riverside walk in front of Butler's Wharf is in fact a concrete jetty with water underneath.

The structure, which is owned by the freeholders of the adjacent buildings, is subject to maritime regulation as part of the river rather than being regarded as dry land.

Local residents have long pressed for better maintenance and recently set up a new organisation dedicated to working for improvements.

"After years of being told nothing could be done and in response to overwhelming support from our community, we are really excited to be able to launch this competition with the London Festival of Architecture," said Dr Emma Sanderson-Nash, chair of Butler's Wharf Riverside Trust.

"We want to encourage visitors and residents to continue to enjoy this important space but also to cherish and understand why it is here, with better lighting, seating and greening while also protecting the views.

"There is an overlooked but vital link between its former warehouse history, the energy of the riverside and its modern use as vital open space in our busy city. It's one of the most iconic yet left behind places in central London and deserving of a serious rethink."

Rosa Rogina, head of programme at the London Festival of Architecture, said: "Millions of Londoners and visitors have strolled along Butler's Wharf without giving a thought to the promenade beneath their feet, and even fewer will be aware of the site's fascinating heritage.

"We are delighted to be working with Butler's Wharf Riverside Trust to enhance one of London's best-loved yet accidental public spaces. Opportunities to re-imagine such a prominent site are few and far between, and we hope that as many teams as possible will seize this amazing opportunity."

Entries will be judged by an expert panel including Sir Terence Conran, Sarah Gaventa of the Illuminated River Foundation and LFA director Tamsie Thomson.

Information for entrants is available on the LFA website.

The deadline for first stage expressions of interest is Friday 24 July.

Up to six shortlisted teams will be awarded an honorarium of Ł500 to develop a design concept.

The winning team will be awarded Ł7,900 to further develop the plans so that funds can be raised for implementation.

The trust hopes that the winning scheme can be delivered or at least started in 2022 to coincide with the jetty's centenary.