A three-month closure of Tower Bridge to road traffic - to allow the decking on the bascules to be replaced - began on Saturday morning. 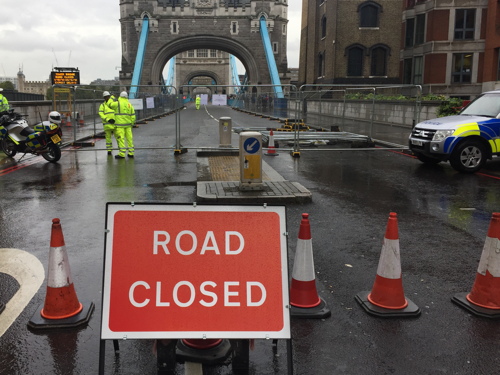 Paul Monaghan, the City of London Corporation's assistant director of engineering, told Bermondsey & Rotherhithe Community Council last month that the degradation of the timber deck on the bascules means that water is getting in and causing the steel structure to rust.

He said: "I'm hoping that everyone gets the message 'don't come to Tower Bridge by car – go somewhere else'."

A TfL representative told the same community council meeting that 50,000 letters and 900,000 emails have been sent out to alert Londoners to the bridge closure.

Whilst the bridge is closed, motorists are being directed to use Southwark Bridge southbound and London Bridge northbound.

The Congestion Charge will not apply if drivers follow the signed diversion routes.

Bus route 42 has been curtailed south of the river, whilst routes 78 and RV1 will travel via London Bridge.

Cyclists can either wheel their bikes across Tower Bridge, or use the official cycling diversion route via London Bridge southbound and Southwark Bridge northbound.

The bridge will remain open to pedestrians apart from three weekends:

A free pedestrian ferry service will be offered between Butler's Wharf Pier and St Katharine's Pier on those three weekends.

Transport for London says it will be stepping up enforcement of loading bay restrictions on its Red Routes in the Tower Bridge area during the closure period.

TfL is also working with Southwark Council and Tower Hamlets Council to limit the number of non-emergency roadworks in the areas either side of the bridge.

Works to alter the junction of Tower Bridge Road and Queen Elizabeth Street – including a new pedestrian crossing – will also be carried out during the bridge closure.

• There will be an opportunity to put questions to Transport for London representatives about the impact of the Tower Bridge closure at Borough, Bankside & Walworth Community Council this Wednesday evening.