Archbishop of Southwark receives the pallium

The Archbishop of Southwark arrived home this weekend having been given the pallium by the Pope in Rome. 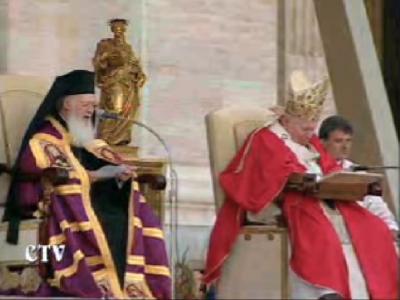 The Ecumenical Patriarch and the Pope during the ceremony

The pallium is a Y-shaped loose collar worn over the chasuble at Mass on special occasions in the archbishop's own diocese. It is the symbol of the jurisdiction that only the Pope can give an archbishop. The conferral of the pallium on an archbishop renews the unity of each group of dioceses with the Apostolic See and the successor to St Peter.

Kevin McDonald, the Roman Catholic Archbishop of Southwark, received the pallium during Mass celebrated in St Peter's Square on the Solemnity of St Peter and St Paul. Present at the historic occasion was the Orthodox leader Patriarch of Constantinople Bartholomew I who preached.

Other archbishops receiving the pallium last Tuesday evening included Philadelphia, Boston USA, Manila, Niteroi in Brazil, Nagasaki in Japan and Cuzco in Peru. About 125 people from Southwark travelled to Rome with Archbishop McDonald.

Archbishop McDonald is due to preside at a Youth Mass in St George's Cathedral on Saturday.