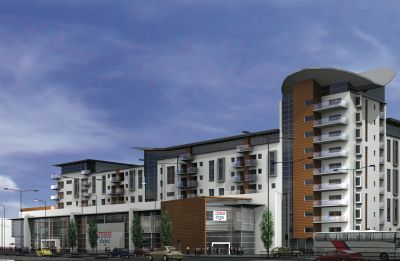 An early conceptial image of the new store

Tesco bosses are keen to stress that the image above is an early concept and that the final planning application will be shaped by the results of consultation with store users, neighbours and other interested parties.

The company has undertaken research with customers at the store who say that they would like to see a larger shop with a bigger range.

The supermarket could well be converted to the Tesco Extra format offering a wide range of non-food items including clothing.

A key element of the new development would be the provision of 320 new homes which would be a mix of private, affordable and key worker housing.

The store currently has a large surface-level car park. This would be replaced with an underground parking area for residents ands shoppers.

Corporate affairs manager James Wiggam says that the company is "really excited" by the prospect of redeveloping the site and is "looking forward to seeing what people have to say" at the consultation events.

Tesco would have to close for more than a year to allow the redevelopment work to take place.

Free exercise class at Tesco to help manage back pain

The Health and Safety Executive will host a morning of exercise classes at Tesco Old Kent Road to help people manage back pain at part of the nationwide Better Backs campaign being launched by the HSE.

Southwark residents will be the first in Britain to benefit from a new back-focused exercise routine that has been designed by Liz Prosser of the charity BackCare.

Rob Marshall from British Military Fitness will hold a series of back-friendly exercise classes in the store between 9.30am and 12.30pm on Monday 9 October.

"Surprisingly back pain will affect 80 percent of us at some point in our lives," says Marcia Davies of the Health and Safety Executive. "The campaign being promoted at Tesco in Southwark aims to show people how staying active throughout a normal day can help them better manage back pain."

Store manager Alistair Williamson adds: "We always take an active interest in the health of our staff, but the sheer scale of the back pain problem in the UK meant that we felt it would be a good opportunity to send the message to customers as well."