Many SE1 residents took part in Sunday's London Marathon. Here are some of their stories. 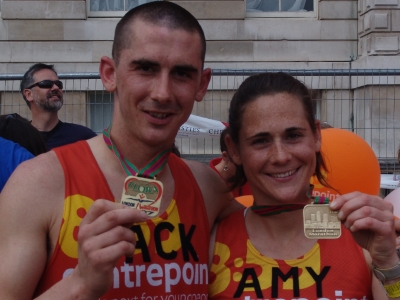 Jack and Amy Lamont ran the Marathon in aid of Centrepoint

Revd Charlie Moore, rector of St Mary Magdalen church in Bermondsey Street, ran the marathon in aid of the Salmon Youth Centre in Bermondsey. He completed the 26-mile run in 5 hours 5 minutes and hopes to raise about Ł1,000 for the youth centre.

Southwark resident Richard Manning took part in his first ever marathon to raise vital funds for the Meningitis Research Foundation. After contracting meningitis in 2004 aged 24 Richard made a full recovery. Completing the marathon in 6 hours and 1 minute, Richard smashed his Ł7,000 fundraising target by raising Ł12,000 for the Foundation.

"Having had this awful disease in June 2004, I know just how debilitating it can be," says Richard. "I feel very fortunate to have survived and now want to increase awareness and support the work of the Foundation. The London Marathon is such a fantastic event and I've really enjoyed my first marathon experience."

Jack and Amy Lamont raised Ł4,500 for youth homelessness charity Centrepoint. They completed the marathon in 4 hours and 20 minutes.

"I have experienced homelessness myself and Centrepoint were a phenomenal support during this time and helped me to get back on my feet," says Jack who now lives in Borough.

"I hope the money we raised will help a young homeless person in the same way Centrepoint helped me."

Broadcaster and Baptist minister Steve Chalke MBE raised well over Ł1.8 million in sponsorship. He finished in 3 hours 58 minutes, making him the fastest-earning sportsperson in history, at a rate of almost half a million pounds an hour.

In 2005 Steve became the official record-holder for the most money ever raised through a marathon, raising Ł1.25 million for the work of Oasis, the SE1-based charity he founded in 1985.

Captain Jonny Smith of Southwark Salvation Army at the Elephant and Castle hopes to raise Ł5,000 for the Chikankata Hospital in Zambia. He completed the marathon in 5 hours 28 minutes.

The Flora London Marathon is masterminded by a team which works year-round from its HQ in Southwark Street.