Two students from SE1 schools have been selected to accompany Southwark Council leader Nick Stanton to Plymouth, Massachusetts, to commemorate the 50th anniversary sailing of the Mayflower II. 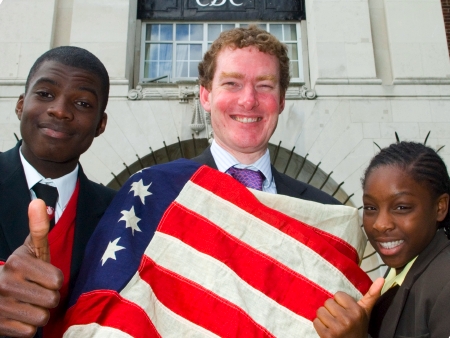 Samuel Thorpe (15), a student at Geoffrey Chaucer Technology College, and Ayowunmi Nuga (14), from Notre Dame Girls' School, will spend five days in Massachusetts. They will undertake a two-day internship at the Plimoth Plantation museum where they will study the lives of settler communities and the Woampanoag, the native people of Massachusetts.

They will also join the flotilla accompanying the Mayflower II, a replica of the 17th century ship Mayflower which carried the Pilgrim Fathers to America.

The captain of the original Mayflower, Christopher Jones, lived in Rotherhithe and is buried in St Mary's churchyard.

"I am really excited about winning the competition and am looking forward to the trip to Massachusetts," says Samuel Thorpe.

Samuel and Ayowunmi were selected for the educational and cultural exchange after they won an essay competition judged by John McDonagh, executive director of the Plimoth Plantation Museum.

The competition was devised by Mayflower 1620 Ltd for this year's intake to the Southwark Young Pilgrims scheme which trains local youngsters to act as ambassadors for the borough.

"This is a great opportunity for Samuel and Ayowunmi, and hopefully it will lead to more opportunities for Southwark students and schools in the future," says Cllr Nick Stanton.

The exchange programme was launched in April when Cllr Stanton visited Massachusetts as part of a trip which also took him to Harvard University in Cambridge where he opened a new student bar called the Harvard Queen's Head named after the Queen's Head in Borough High Street which had been owned by the Harvard family.

2007 is the 400th anniversary of the birth of John Havard who was born in Southwark and baptised in the church now known as Southwark Cathedral.

During his next trip to Massachusetts Cllr Stanton will be meeting leading local politicians to explore ways of opening up further cultural and educational opportunities for Southwark residents.