A scheme that trains local young people to provide information to visitors at Bankside and London Bridge has received £12,000 funding from the Jack Petchey Foundation. 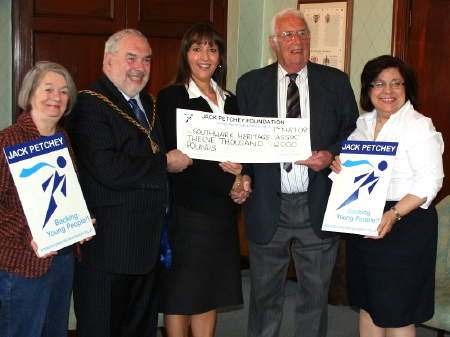 The Jack Petchey foundation has agreed to fund the course for a second year to the tune of Ł12,000.

The cheque was presented to training providers Mayflower 1620 Ltd at the the Mayor's Parlour at Southwark Town Hall on Wednesday.

"On visiting this unique project I was impressed with the dedication of staff and the open availability to young people," said Jane Evans of the Jack Petchey Foundation.

The Southwark Young Pilgrims project was the first organisation south of the river to be awarded funding from the Jack Petchey Doundation.

For the past 11 years the course has been run by training providers Mayflower 1620 Ltd for Southwark Heritage Association who provides a charitable umbrella for this and other small local projects.

The project cost of Ł54,000 relies solely upon the money raised by Mayflower 1620 Ltd from local businesses and donations from organisations such as the Jack Petchey Foundation.

The SYP project takes year 11 students who live or go to school in the borough and trains them to be ambassadors for the borough during the Spring and Summer school holidays.

In 2007 the young people helped with more than 11,000 visitor enquiries at London Bridge and Bankside whilst handing out nearly 60,000 leaflets during the six week summer break.

The service will be more vital than ever this year since the closure of the borough's tourist information centre.