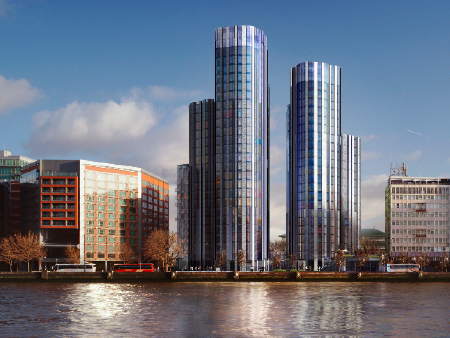 The proposed development seen from Millbank 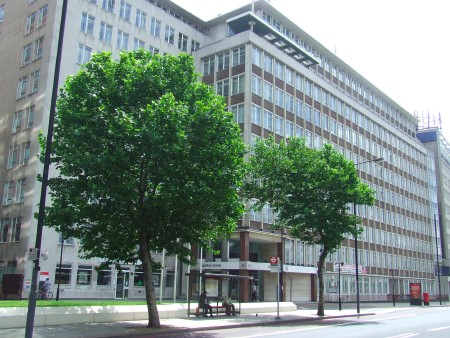 The site is immediately south of the Riverbank Park Plaza hotel on Albert Embankment and sits between the river and the Waterloo to Vauxhall railway line.

The development includes a 167-room apart-hotel and 242 new homes in the three towers which range in height from 13 to 27 storeys.

Unusually for a tall building proposed near the river, English Heritage opted not to lodge an objection on this occasion as the new development will be hidden behind the Victoria Tower of the Palace of Westminster in the protected view from Parliament Hill.

The tallest building in this scheme (90 metres) would be taller than the London Television Centre tower on the South Bank (85 metres) but not as tall as Millbank Tower across the river (119 metres).

The application is now likely to be the subject of some bargaining between the developers and the Mayor of London in the coming weeks as Ken Livingstone has indicated that he is dissatisfied with the level of affordable housing proposed and is minded to direct Lambeth Council to refuse the application.

The developers say that they can only afford to provide 32 per cent of the habitable rooms (77 of the 232 proposed homes) in the development as shared ownership or social rented housing, whereas Lambeth and London planning policy would expect 40 per cent in a development that was not receiving public subsidy.

The meeting heard from Tim Boxall – speaking on behalf of the Vauxhall Gardens Community Centre and the Kennington Association – who objected to the scheme for creating "vertical gated communities".

He criticised the developer for failing to consult with residents of the housing estates to the east of the railway line and for the lack of mitigation to the loss of light and views residents will suffer.

Architect Dan Sibert of Foster & Partners told councillors that the scheme had been designed "on a local rather than a metropolitan scale", explaining that building higher enabled new spaces to be opened up at ground level.

Councillors were generally supportive of the scheme's design but reluctantly accepted the lower than desired level of affordable housing.

"I don't think there's a person around this committee table who's not largely unhappy with the percentage of affordable housing," said committee chair Cllr Toren Smith.

Members of the planning applications committee voted three to one to resolve to grant planning permission, subject to the signing of a section 106 agreement.