David Idowu’s parents: "Our lives can never be the same again"

The parents of murdered Tabard Gardens teenager David Idowu have visited the spot where he was found seriously injured three weeks ago. 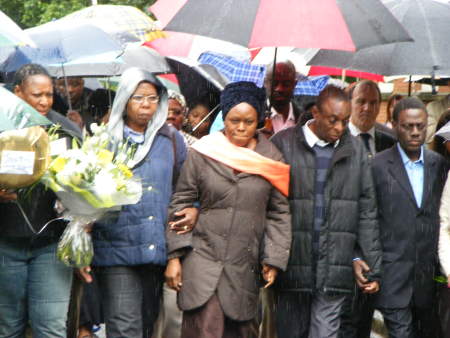 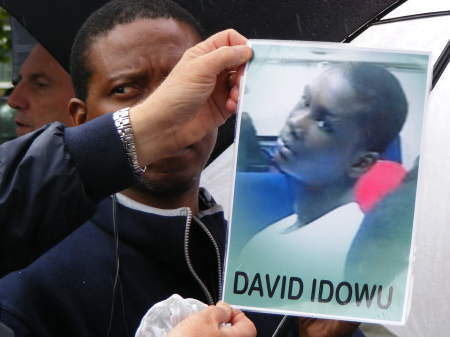 A picture of David Idowu is held aloft by a mourner 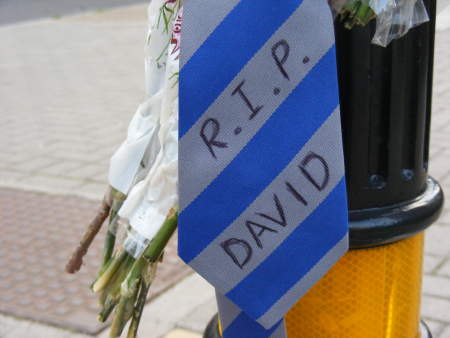 A simple message on a Walworth Academy tie

Friends and community representatives gathered in pouring rain in Becket Street on Wednesday morning to support Tim and Grace Idowu who were making their first appearance since the news of their 14-year-old son's death on Monday.

David Idowu, who lived on the Tabard Gardens Estate and attended the Walworth Academy, was attacked in the Tabard Street area on Tuesday 17 June.

The couple, accompanied by teenage sons Peter and James and their extended family, were met in Tabard Street by Fr Ray Andrews of nearby St George the Martyr Church before leading the assembly in silence to the south-east corner of Becket Street and Great Dover Street opposite The Roebuck pub.

"We love you David but God loves you more, may your heart and soul rest in peace," said Mrs Idowu who immediately knelt and sang a lament.

Flowers were laid by friends and neighbours. One former neighbour, who had known David since his birth, travelled from Erith to be with the family during the visit. Among others present were Simon Hughes MP, Chaucer ward councillor Lorraine Zuleta and council executive member Adele Morris.

"I know my redeemer lives," said Mrs Idowu shortly before leaving home to visit the site. "David gave his life to Jesus Christ when he was 10 years old. The thief does not come except to steal and kill and to destroy, but Jesus Christ came that we may have life and have it more abundantly. David is with his heavenly father but we shall see him again. The body of Christ let us call for revival on this great nation and God will hear us."

Mr Idowu, a 56-year-old bus driver, added: "He always thought of what to do now and what will happen in the future. He believed change can only come through good world leaders and
had recently visited Madam Tussaud's to have his picture taken with President Clinton who he admired and wanted to emulate.

"He was the light of this house, organised and managed things. He was very good in computing. I never attended any courses in computing, David taught me at home to be computer literate.

"Our lives can never be the same again."