Jean Love, who has worked for Charterhouse-in-Southwark as housekeeper - and latterly receptionist - has retired after 32 years as the Borough charity winds down its operations. 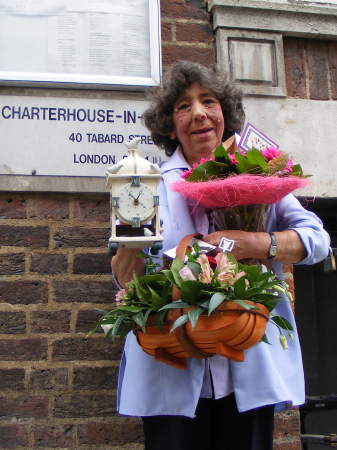 78-year-old Jean joined Charterhouse-in-Southwark in the mid-1970s as a result of a conversation with a neighbour whilst walking her dog in Tabard Gardens.

For the first two decades Jean worked as housekeeper and cleaner at the charity's 40 Tabard Street base before taking on the role of receptionist.

Therapist Joe Callaghan made a ceramic clock which was presented to Jean at her farewell party last week. Simon Hughes MP dropped in and made a presentation to Jean who has been inundated with cards and flowers from past and present Charterhouse staff and users.

"It was right and fitting that there was such a big turnout to say thank you to Jean and other members of the Charterhouse family on Jean's last day," said the North Southwark and Bermondsey MP.

"The commitment and service Jean has given to Charterhouse and its users is beyond words.

"The strength of our community comes from its people more than its buildings. Jean and many others will go on being valued and appreciated whatever the effect of the changes Charterhouse have announced."

Earlier this year Charterhouse-in-Southwark – founded in 1885 – shocked many local residents when it announced its intention to sell its three local buildings and become a funder of community services rather than a direct provider.

Hundreds of people signed a petition calling for a rethink of the changes.

Services based at Charterhouse – including the Tabard After School Project – are now searching for new premises in the area.