Simon Hughes MP was the star performer at the 'So, Hugh's Got Talent...?' showcase at St Hugh's church in Crosby Row on Friday night. 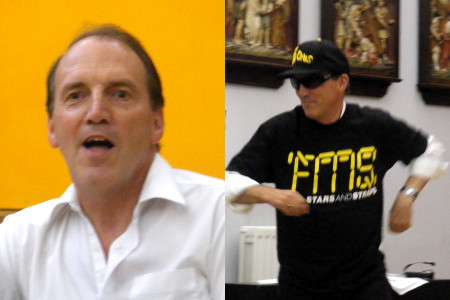 Simon Hughes MP at the 'So, Hugh's Got Talent...?' showcase

The talent showcase was the culmination of a week of volunteer-run dance and drama classes for local young people held at St Hugh's as part of the 'This is OUR Manor' programme of activities centred on the Tabard Gardens Estate.

14 young people performed in the talent show in front of an audience of parents, friends and neighbours.

Funds raised at the event will go towards a permanent memorial in Tabard Gardens to David Idowu, the local boy who was fatally wounded by another teenager just yards from his home last summer.

David's brother Peter joined the audience at St Hugh's for the show which included a mixture of music, dance and comedy.

Simon Hughes MP began his contribution to the show by singing a song called "Night time in Bermondsey" which was performed each year at the end of the annual Guy's Hospital staff pantomime.

He then donned a T-shirt and baseball cap to perform an energetic version of 'Head, Shoulders, Knees and Toes'.

The North Southwark and Bermondsey MP helped to judge the talent contest along with Revd Linda Scott-Garnett and Genevieve Collier. The winners were Ife and Jonell who performed a highly unusual hybrid item that moved seamlessly from stand-up comedy to a recorder recital.

St Hugh's church is part of the Rainbow Building at the corner of Crosby Row and Porlock Street which has been largely disused since it was vacated by the Charterhouse-in-Southwark charity.

A new church is likely to be built when the site is redeveloped by new owners.