The Archbishop of Canterbury has led 600 Anglican bishops on foot across Lambeth Bridge. 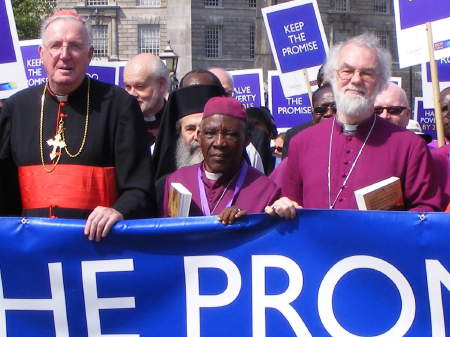 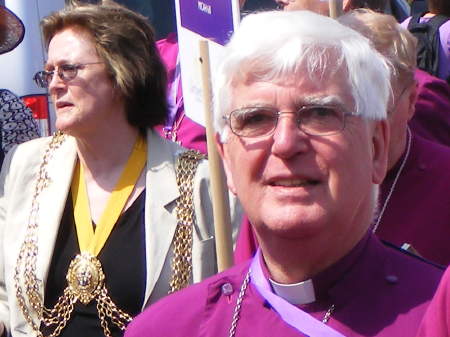 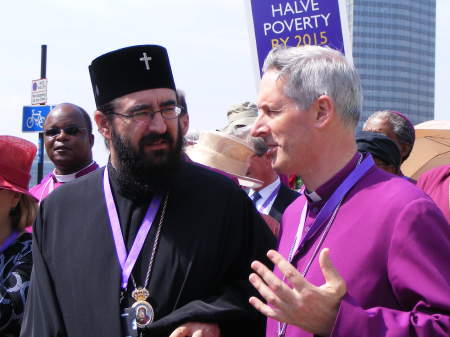 Rowan Williams was at the head of the Lambeth Conference delegates as they demonstrated their commitment to help end extreme poverty across the globe.

The column of episcopal purple crossed Lambeth Bridge to enter Lambeth Palace where the first Lambeth Conference met in 1867. The gathering of world-wide Anglican bishops now meets every ten years in Canterbury.

The primate was supported at the front of the procession by the Roman Catholic Cardinal Cormac Murphy-O'Connor of Westminster and other faith leaders.

The Mayor of Lambeth Cllr Angela Meader, who chose to walk into her borough with the visitors, was accompanied by the Bishop of Southwark Tom Butler.

Christopher Chessun, Bishop of Woolwich, walked with Metropolitan Joseph Pop from the Romanian Orthodox Church who is responsible for over two million people in Europe.

Also arriving with the bishops at Lambeth Palace was Revd Joabe Cavalcanti who until this summer was assistant priest at St Hugh's West Bermondsey and chaplain to St Saviour's and St Olave's School.

Afterwards the bishops gathered in the Lambeth Palace garden for a rally calling on government leaders to deliver the Millennium Development Goals before the next Lambeth Conference in 2018.

"This is one of the greatest public demonstrations of faith that this country has ever seen," said Prime Minister Gordon Brown when he addressed the international audience.

"You have sent a symbol, a very clear message with rising force that poverty can be eradicated, poverty must be eradicated and if we all work together for change poverty will be eradicated."

The bishops had breakfasted at 6am in Canterbury in order to be in Whitehall by 10am.

In the afternoon the Queen entertained the Lambeth Conference to tea on the Buckingham Palace lawn.