A small congregation gathered in Southwark Cathedral on Wednesday for a Civic Service organised by the Mayor of Southwark, Cllr Eliza Mann, to support her charity appeal for Diabetes UK. 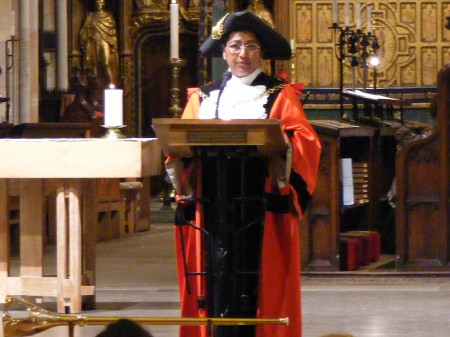 Cllr Eliza Mann, Mayor of Southwark, addresses the congregation at the Civic Service 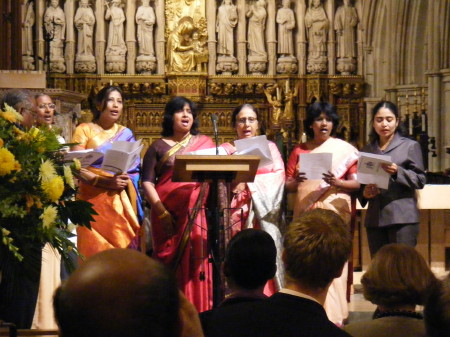 A Tamil choir performed during the service

The service was led by Canon Andrew Nunn, sub dean of Southwark Cathedral, who told the congregation that that "people of faith, together with people of no faith, are working together in Southwark to make the very best of the glorious diversity of which we are part".

Anne Wolfe, chair of the Southwark Education Business Alliance, spoke about what Southwark means to her. She recalled moving to work for PricewaterhouseCoopers at London Bridge and gradually learning more about Southwark's distinctive sense of community.

"We all know that Southwark has its challenges too, but being proud of our surroundings – one's sense of place – can have an important and positive influence on emotional health," she said.

Cllr Mann, who is from Sri Lanka, invited a Tamil choir to perform during the service.

"It is often asserted that communities and organisations cannot be both united and diverse," said Cllr Eliza Mann during her address.

"Southwark is a place where a strong community has unity in diversity ... It sits within a city of many races, communities, languages, cultures and tensions."

Including the Mayor herself, only five of Southwark's 62 serving councillors were present for the Civic Service and none of the leaders of the borough's political groups were in attendance.

Other events to be held in support of the mayor's fundraising and awareness-raising for Diabetes UK include Southwark Diabetes Week in November and a charity ball at the end of her mayoral year in May 2009.