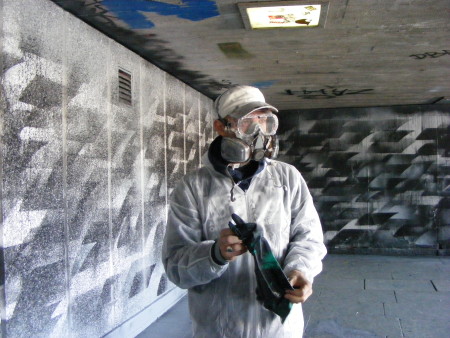 Robin Rhode at work in the QEH undercroft on Friday 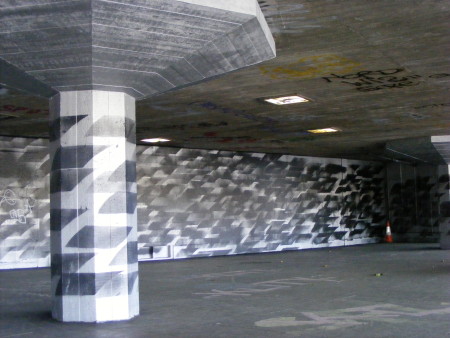 Rhode has saturated the undercroft's walls, ramps and columns in reflective silver paint. Using this base, he and his team of 10 assistants worked with stencils and paint compressors to create geometric patterns in contrasting shades of white, black and grey.

"My idea for the project is to create an optic environment using layered geometric forms that are sprayed directly onto the wall through a stencil," explains Robin Rhode.

"These forms will animate the environment, particularly for the skateboarders moving through the space."

The undercroft artwork has been created in advance of a major exhibition which opens on Tuesday at The Hayward which will give an overview of Rhode's work drawn from the last ten years as well as showing new pieces.

The use of the Queen Elizabeth Hall undercroft by skateboarders has not always been welcomed by Southbank Centre management, but that changed in 2004 when 'skateable sculptures' were installed in the area.

Earlier this year the skating community became alarmed by the Southbank Centre's proposals to create a new entrance to the Queen Elizabeth Hall directly on the riverside walk.

More than 4,000 people signed a petition to the prime minister urging him to guarantee the future of skateboarding on the South Bank.

In July we asked Southbank Centre chief executive Michael Lynch about the future of the QEH undercroft as a skating venue.

"I think there's no question that we see skateboarding as an important part of what we're doing," he said.

"I started off as a skater so I know where it works. There are better ways, I think, that we can make the space work, depending on what the future plans [for the buildings] are."

Asked whether skaters would still be welcome on the South Bank in five years time, Mr Lynch replied: "They have been for thirty years, so I see no reason why that's going to change."