Lambeth Police are appealing for witnesses and information regarding a theft which happened when the victim was asked for directions in Sandell Street on Thursday 2 October at about 1.15pm. 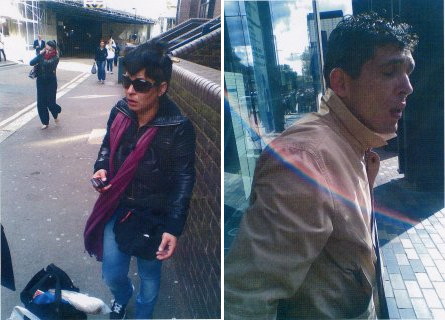 Lambeth Police would like to talk to these two people

Lambeth detectives say that a female was approached by suspect 1 who showed her a map and asked for directions.

While the woman was distracted, suspect 1 put her hand into the the victim's handbag and removed her purse. The victim realised this and grabbed hold of suspect 1. Suspect 1 then handed the purse to suspect 2 who ran off with the purse.

Suspect 2 returned a short time later and gave back the purse. The female victim allowed both suspects to leave but when she checked her purse she discovered that cash and a bankcard had been taken.

Do you recognise either of the people in the photographs? Were you in the area at the time?

Do you remember seeing two people leaving the scene? If so the police would like to hear from you.

DC Ben Massink of Lambeth Police is leading the inquiry and can be contacted on 020 8649 2434. Alternatively you can give information anonymously to Crimestoppers on 0800 555 111.