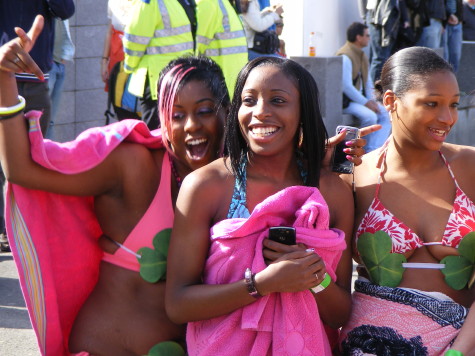 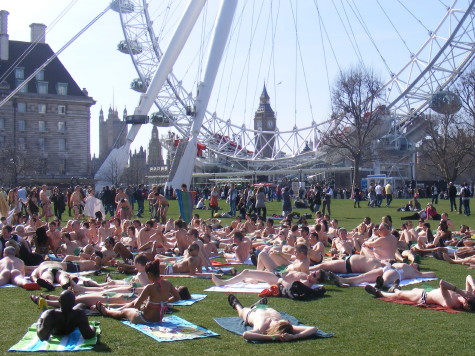 Volunteers who enrolled via the website 999nudes.com were only told that the "outrageous stunt" would be promoting a "major airline" and that they would receive two free flights in return for taking part.

Participants gathered on Sunday morning at the Park Plaza Riverbank hotel on Albert Embankment to receive their instructions – and cardboard shamrocks to protect their modesty.

Although 999 volunteers were sought to promote Ł9.99 air fares from Gatwick Airport, it is thought that fewer than half that number took part.

Stewards led the volunteers from the hotel along the riverside walk to Jubilee Gardens where they were ordered to perform star jumps and do an impression of an aeroplane in front of assembled press photographers.

The Irish airline's stunt coincided with the St Patrick's Day parade through the streets of Westminster on the north bank of the Thames.

• Irish naval vessel Le Roisin is moored next to HMS Belfast until Thursday morning. The offshore patrol ship will be open to the public until Wednesday (normal HMS Belfast admission charges apply).