Gerhard Jenne, founder of the cake shop, has published a recipe book 'Konditor & Cook: Deservedly Legendary Baking' featuring some of his popular cakes. 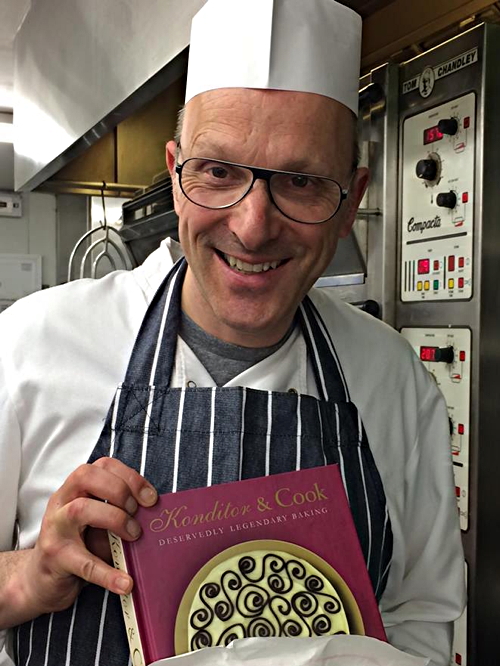 "Ever since I trained as a baker and pastry chef in Germany, I dreamed of opening my own konditorei (cake shop)," writes Gerhard Jenne in the introduction to the book.

He signed the first 500 copies of the book which went on sale on May Day in his original Konditor & Cook shop in Waterloo.

He bought the Queen of Hearts bakery at the junction of Roupell Street and Cornwall Road in 1993. The name he chose for the corner shop links Germany and London. He had been a konditor, or pastry chef, in Germany but learnt to cook savoury dishes at Justin de Blank in London.

One of the first recipes in the book is Henrietta's Tipsy Cake recipe which is the cake he used to make in Munich with Henrietta Ott who inspired him to go to London.

Gerhard's shops pay close attention to the calendar of seasons and festivals which means that there are such treats as St Patrick's Day cupcakes with harp decoration on 17 March and St George's Day scones stuffed with strawberries and cream on 23 April. In Advent cinnamon stars appear which Gerhard warns are difficult to make. Easter now sees the Velvet Bunny appear amongst the eggs and simnel cakes.

Gerhard – a self-proclaimed "cake decorator for the rock n roll generation" – cites Matisse and Lichtenstein among his inspirations for the visual finish to his products..

Sir Terence Conran provides the book's foreword along with a sketch of the huge cake K&C produced for his 80th birthday. He says that going into the original shop on the corner of Cornwall Road and Roupell Street was like "entering a fairyland imagined by Hans Christian Andersen, filled with the most wonderous cakes and pastries that not only looked magical but tasted divine too".

As well as the Waterloo and Borough Market branches in SE1, K&C shops are also now found at The Gherkin in the City, Holborn and Soho. A cake school is in Stamford Street.