Rambert Dance Company's plans for a £19 million headquarters on Upper Ground could go ahead separately from the stalled Doon Street tower scheme, it has emerged. 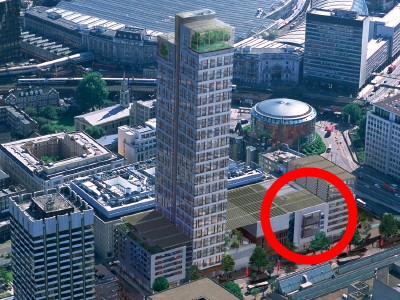 Rambert's plans – first announced in 2005 – to build new headquarters on a site between Doon Street and Upper Ground (across the road from the National Theatre) have been on hold whilst Coin Street Community Builders' plans to build a 43-storey tower of private apartments and a public leisure centre were the subject of a public inquiry and High Court challenge.

The dance HQ – designed by local firm Allies and Morrison – was approved by Lambeth councillors in August 2007 and was not part of the public inquiry into the tower scheme which is designed by Lifschutz Davidson Sandilands.

Until recently Coin Street Community Builders' position has been that Rambert could not proceed with its development until all their planning issues had been resolved.

A judicial review of Hazel Blears' decision to approve the Doon Street tower – against the recommendation of the planning inspector who conducted the public inquiry – is expected on 16 June.

In an announcement posted on Rambert's website on 24 March, the dance company says that Coin Street Community Builders have told them that – subject to certain contractual issues being resolved – they may proceed with their scheme regardless of the outcome of the High Court appeal.

"For six years we have been working on plans to move to the South Bank and we have been indebted and most grateful to Coin Street Community Builders and its visionary director, Iain Tuckett, for the donation of this land," says Rambert chair Prudence Skene.

"We are delighted to have received the go ahead, subject of course to contract. Our fundraising campaign will build on the very generous financial commitments of Ł8 million we have already secured for this project.

"We know that in this current climate raising the additionalŁ11 million needed will be a huge challenge, but we have spoken to many individuals, grant-giving trusts and businesses and have been greatly encouraged by their interest in supporting us."

The decision by Coin Street to give the prime South Bank land to the dance company has been controversial in some quarters, given the history of the struggle in the early 1980s to protect the land for affordable housing development.