Shakespeare's Globe is embarking on a £6 million capital project to develop a Globe Education and Rehearsal Centre in a Victorian building close to the Bankside replica playhouse. 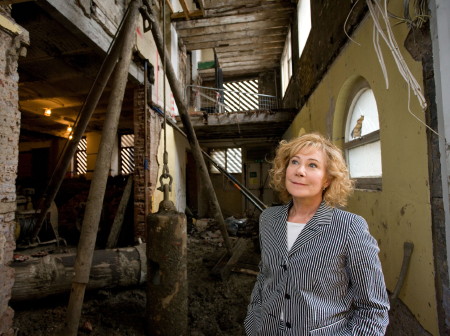 Construction work has begun to transform the building on the corner of Bear Gardens and Park Street into four floors of education and rehearsal space.

It will provide Globe Education with a base to develop its programme that already works with more than 100,000 students of all ages every year. There will be a strong emphasis on work with Southwark schools and community groups.

The old warehouse at 58 Park Street is the space in which Sam Wanamaker first began developing his ideas for the Globe project and where many of Globe Education's programmes were first developed.

A Globe Education Centre promoting theatre-based approaches to the teaching and enjoyment of Shakespeare's plays was always part of his vision. Globe Education was founded 8 years before the Globe Theatre opened.

"It is a significant moment to see more of my father's dream become a reality," said Sam's daughter Zoe Wanamaker during a visit to the construction site.

"The Globe Education and Rehearsal Centre will provide a state-of-the-art home to complement the quality of the pioneering education programmes undertaken here."

Globe Education director Patrick Spottiswoode added: "Sam always wanted the Globe to be rooted in its community of Southwark and to be a resource for the community.

"For 20 years Globe Education has been working with Southwark teachers and students from early years to primary, secondary and further education. The new Globe Education and Rehearsal Centre will give us a bespoke home in Southwark for Southwark and will enable us to develop projects with families and two new Southwark Youth Theatre groups".

At the end of 2006 Southwark Council agreed to sell the building to Shakespeare's Globe.

"It is amazing to witness years of hard work come to fruition," says Cllr Tim McNally, executive member for resources.

"As a council it has never been more important to make the right decisions when it comes to retaining or selling our buildings. In the case of the Globe I don't think anyone can argue that this sale can only be good for the borough.

"The Globe is a major cultural landmark and it is great to think that we have played a part in helping it expand and reach out to the community in new and exciting ways."

The new Globe Education and Rehearsal Centre is due for completion in late spring 2010 and will include four workshop studios and a rehearsal studio for use by students and theatre practitioners.

It has been designed by Globe architect Jon Greenfield with input and internal designs by Eldridge Smerin. Following consultation with young students from Southwark , Eldridge Smerin responded to the wish that the centre reflect the Globe Theatre by incorporating oak and the shape of the theatre into their designs.