Bosses of the 21 arts organisations belonging to the South Bank and Bankside Cultural Quarter have warned ministers that they must not lose their nerve and withdraw funding for major projects such as the extension of Tate Modern. 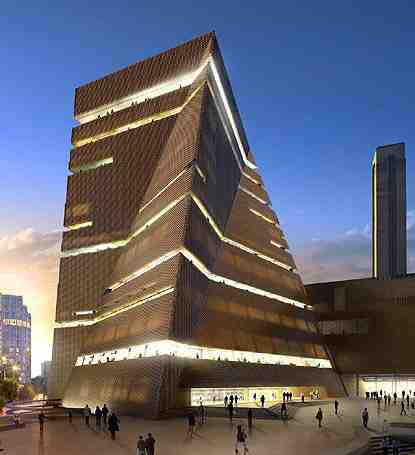 Government funding for Tate Modern's extension could be under threat

In 2007 the then culture secretary James Purnell announced Ł50 million of Government funding towards the proposed extension of Tate Modern on Bankside.

The British Film Institute has also been seeking Government backing for its proposed film centre on the Hungerford Car Park site at Jubilee Gardens.

In a recent interview with The Times junior arts minister Barbara Follett warned that there are "too many schemes bidding for too little money".

A spokesman for the Department of Culture, Media and Sport told The Times: "Our capital budget is currently overcommitted. Ministers are examining the reasons for this and looking for solutions. It is possible that difficult decisions will be needed, but none has been taken yet."

The members of the South Bank and Bankside Cultural Quarter group claim that together they attract more than than 12 million visitors each year and provide lifelong learning opportunities to more than three-quarters of a million people, including local communities. Their combine contribution to the nation's economy is in excess of Ł150 million.

In a joint letter to The Guardian, published on Saturday, they say: "Our Cultural Quarter includes two of the major capital projects that may be under threat as a result of the Department of Culture, Media and Sport's capital budget overspend – the stage 2 development of Tate Modern and the BFI National Film Centre.

"We are alarmed that these world-class projects may be axed precisely at a time when the eyes of the world will be on London for the 2012 Olympic and Paralympic Games.

"We believe that such a withdrawal of committed investment to our cultural life will be seen as a loss of nerve internationally and will have irrevocable consequences for the creativity and ambition of future generations in this country."

Signatories to the letter include Tate's Sir Nicholas Serota and Donald Hyslop, the BFI's Amanda Nevill and Eddie Berg, Nicholas Hytner of the National Theatre and Alan Bishop and Jude Kelly of Southbank Centre.