Southbank Centre is to put its planning application for the redevelopment of the Queen Elizabeth Hall, Purcell Room and Hayward Gallery on hold for a further three months. 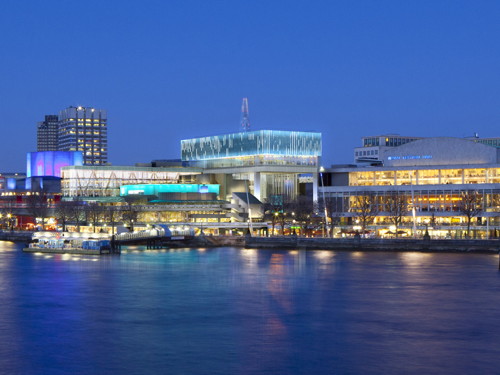 The decision follows last month's announcement by Mayor of London Boris Johnson that he would not back the proposals if they involved the loss of the current space used by skateboarders in the Queen Elizabeth Hall undercroft.

The centre hoped to turn the riverside portion of the undercroft into a series of restaurants which would provide income to support commercial loans to help fund the rest of the development.

"This is a big setback to a scheme which would serve millions if completed," said Rick Haythornthwaite, chairman of Southbank Centre.

"The case for closing the project down right now is compelling but we feel we owe a last ditch revival attempt to the many people that have supported us over the past four years of planning, not least the Arts Council England. Boris Johnson and Lambeth Council have both made clear that they wish to see the scheme proceed and we look forward to hearing their ideas.

"But we are under no illusions. We have been handed a massive challenge and we don't yet see how we will make it work – it is not as if we haven't already explored numerous options. Our battle has never been with the skateboarders, whom we have welcomed and guaranteed a future on our site. The battle has always been against the economics of bringing a set of crumbling and inefficient buildings into the 21st century, in the context of declining public funding.

"If we are to have any chance of finding new answers then we need, over the next three months, the help of everyone with an interest in putting the final touches to a world class South Bank cultural quarter. If we all fail to find a solution, the buildings problems do not go away. But the needs of the new people attracted by our success over recent years would have to wait to be met until a yet more radical solution to this hitherto intractable problem emerges."

Southbank Centre's board will now undertake a final search for an alternative funding model for the scheme.

A centre spokeswoman said: "It is far from clear how the scheme might now proceed without exposing Southbank Centre to unacceptable levels of financial risk but it has committed to a final three month search with all parties, including the Mayor's Office, Lambeth Council and the skateboarders.

"The aspiration is to find concrete and practical alternative ideas for funding the public realm works that comprise an unusually high proportion of the Festival Wing project but will not attract funding from the philanthropic or sponsorship community."

On Monday Boris Johnson denied that by speaking out he had fettered his discretion to make a final decision on the scheme.

The Mayor told London Assembly member Stephen Knight that "...there is no obligation for me to indicate my intentions regarding a possible direction, and no such decision should be inferred from my statement and comments regarding my eventual decision at stage 2 after the council has made its resolution".