Residents campaigning against plans by Southwark Cathedral to redevelop the site of All Hallows Church in Copperfield Street have submitted an alternative proposal to church authorities. 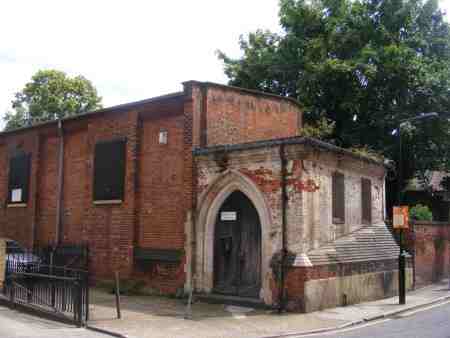 All Hallows seen from Pepper Street

In June the Cathedral announced its third set of proposals for a development of new housing and worship/community space after the refusal and withdrawal of previous planning applications.

The cathedral wants to develop the remains of the church – and the adjacent church hall – to include 9 flats, a worship space and new accommodation for the cathedral's canon pastor (parish priest).

Neighbours living on the Winchester Estate fear that the new building will block out light to their flats and reduce their privacy.

Despite public assurances from Dean of Southwark Colin Slee that access to the much-loved All Hallows Garden will be maintained in future, the campaigners also fear for the green space if it is "turned into the front lawn of a block of flats".

"Colin Slee's latest proposal, and his indications about submitting more until he gets planning permission, threatens to destroy the community that generations of our residents have helped to build," says a spokesperson for the Save All Hallows campaign.

"In the interests of peace and reconciliation we are appealing to Archbishop Desmond Tutu, a world-renowned authority on conflict resolution, to use his influence with Colin Slee – who is the chairman of the Tutu Foundation UK – to withdraw these plans and work with the community on finding a solution acceptable to both sides.

"We are asking Desmond Tutu to appeal to the Dean to put people and community before profit.

"Residents believe there is no financial or legal justification for the latest Cathedral proposal, as the Dean claims."

Earlier this month the campaigners presented to Southwark Cathedral an alternative proposal for the development of the All Hallows' site as a community and cultural centre which they believe has the potential to deliver as much, if not more, income as the cathedral's own scheme.

The cathedral argues that a development at All Hallows would provide both an income stream to finance pastoral work and a new space for some of that work to be carried out.

Southwark Cathedral did not respond to our request for a comment on the residents' proposals.

• The cathedral's proposals can be seen here whilst the campaigners' counter-proposal can be viewed at www.saveallhallows.com