A large congregation filled the nave of Southwark Cathedral on Tuesday for the funeral of local activist Ted Bowman who died last month. 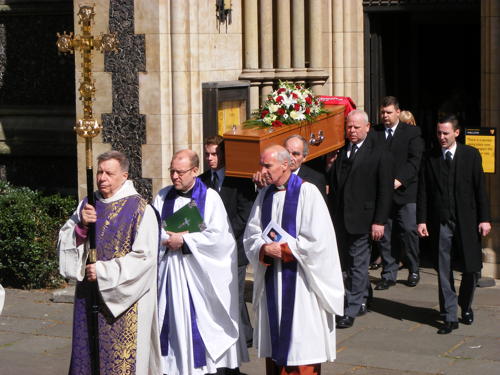 The Dean of Southwark, the Very Revd Andrew Nunn, said that he knew there would be a lot of people at Ted Bowman's funeral as he "had been part of our community for so long".

He was speaking as a long column of mourners followed the coffin into the cathedral on Tuesday morning.

"Love, passion, tenacity, humility," were the opening words of the eulogy given by Ted Bowman's colleague and neighbour George Nicholson. He described his friend of many years as "a warm, caring, considerate and honest man who inspired great loyalty both from family and friends and also from many people drawn together by him in numerous campaigns and projects".

"Ted was very proud to be chair of the Trustees of Borough Market and the Warden of the Great Account of United St Saviour's Charity," said George Nicholson.

"He was also involved in other local charities not from any personal vanity but because as someone born in the Borough, and he spent almost all his adult life in the parish of St Saviour's, to him as a local resident it was right that ordinary working class people should be represented in local institutions.

"Borough Market would not have existed at all today if the earlier churchwardens of this parish church hadn't petitioned Parliament 250 years ago to create the market on its present site.

"Ted's tenure as a trustee of Borough Market was in many ways just as significant, stretching over thirty years as with many other organisations. Without Ted's tenacity of vision as chairman of trustees, Borough Market as it is now known today would not exist.

"When in 1994 Southwark Council threatened to close the market on health grounds there were not too many people willing to give help and advice. Leadership is something of a lonely place but Ted accepted the role without hesitation."

The Dean began his sermon by recalling the Old Testament story of Elisha picking up the mantle of Elijah who was passionate for justice.

"In the last few weeks we have seen the death of first Bob Crow and Tony Benn and now Ted Bowman and I place all three together. All have been thorns in the side of the establishment, a nuisance to those who hold power to a greater or lesser extent. Each of them had that passion for justice and for standing up for what they believed to be right.

"Each of them was true to their socialist principles and my question to myself and to you is 'Who picks up the mantle which has fallen?'."

The Dean added that the Church was interested in politics because "we are interested in people, and community, and justice, and right and all the things that politics is involved with and political people should be passionate about".

He described the Beatitudes in St Matthew's Gospel, which had just been read, as "subversive, radical and deeply political". It was the setting out of Jesus' manifesto.

The first lesson was read by neighbour and Ted's fellow All Hallows gardener Kevin Jones.

The coffin had arrived by way of Borough Market at the cathedral where Ted had known such occasions as a family wedding and the funeral of his friend Eric Tucker.

The several hundred strong congregation included the Revd David Pape and other friends of Ted who in recent years made up the Wednesday quiz night teams at The Charles Dickens pub in Union Street.

A cremation followed at Honor Oak. The ashes will be buried in the All Hallows Garden.