Simon Hughes MP has tabled an early day motion in the House of Commons to congratulate David Haye, the Bermondsey-born winner of the WBA world heavyweight boxing title. 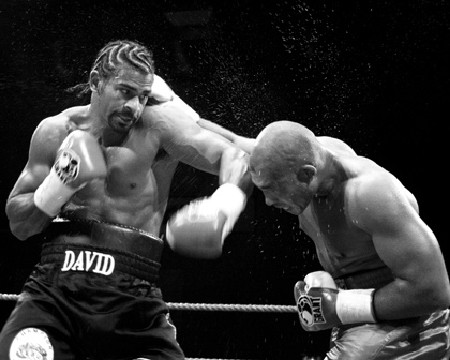 David Haye in 2006 during a fight with Ismail Abdoul. Photo by Loura Conerney is reproduced under a Creative Commons licence

David Haye attended Snowsfields Primary School in Kirby Grove and started to box at the age of 10 at Fitzroy Lodge Amateur Boxing Club under the railway arches in Lambeth Road SE1.

"We sent David to Germany with our wishes and hopes, but it was against all the odds that David has beaten Goliath," said Simon Hughes MP.

"Yet again, following in the footsteps of Lloyd Honeyghan, South London has shown that we can deliver the best boxing not only in Britain, but in the world.

"There will be enormous celebrations when David returns home."

On Monday David Haye held a homecoming press conference at the Park Plaza Riverbank hotel on Albert Embankment where he had spent weeks preparing for Saturday's fight with Russian Nikolai Valuev in Nuremberg.

The North Southwark and Bermondsey MP has also tabled an early day motion in the House of Commons: "That this House congratulates David Haye, a Bermondsey boy and the pride of south London, all of our capital city and the United Kingdom, on his huge success in winning the World Boxing Association World Heavyweight title in Germany on 7 November 2009; salutes this victory of David against Goliath; and wishes him continuing great success both as a world boxing champion and as a role model for young men in London and in many places much further afield."

So far the EDM has only attracted one other signatory.