The South Bank Clean Team is a new service operating seven days a week to keep the streets of South Bank and Waterloo clean and tidy for local residents, employees and visitors. 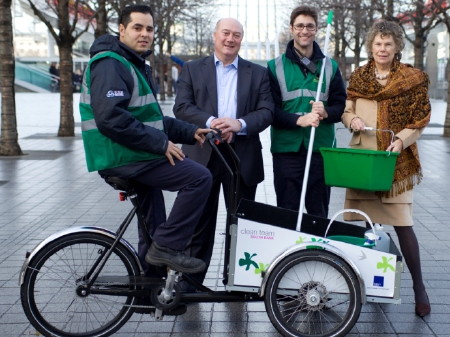 Their focus will be on those jobs that can often be ignored but which make a huge difference to the overall experience of the area. The service is a joint initiative between South Bank Partnership and Lambeth Council, funded by Section 106 contributions from the Merlin Entertainments London Eye and managed by South Bank Employers' Group.

The South Bank Clean Team will operate on both publicly and privately-owned land in the area. One of their first jobs was to remove rubbish and weeds around Victory Arch at Waterloo Station.

Typical tasks for the team will include clearing up cigarette butts in doorways, tidying up landscape borders and weeding, jet-washing locations that suffer from public urination and removing needles from public areas.

The South Bank Clean Team will also polish the metal bins and lampposts, maintaining public art such as the glass wall installation on Sutton Walk as well looking after the new Legible London signage which is currently being installed.

Members of the team will also act as ambassadors for the area and will assist with visitor enquiries, such as providing directions and maps.

"The South Bank Clean Team will deliver a greatly enhanced cleansing service and make the everyday experience of South Bank and Waterloo even better."

Meanwhile a new digital radio communications network has also been installed in the area by Arqiva and South Bank Employers' Group.

SBEG employs a private patrol service and co-ordinates security activities amongst many businesses, using radio handsets that enable communication on any reported security concerns to be shared quickly.

"Arqiva's radio scheme is linked in to all 24-hour security control rooms in the SBEG area and now acts as the thread that binds the different safety schemes and teams together," says security co-ordinator David Clark.

"We are now better able to respond to situations in real-time – which we couldn't do before; we've been able to reunite children with their parents, made a number of arrests, prevented anti-social behaviour and continually monitor for potential terrorist activity."