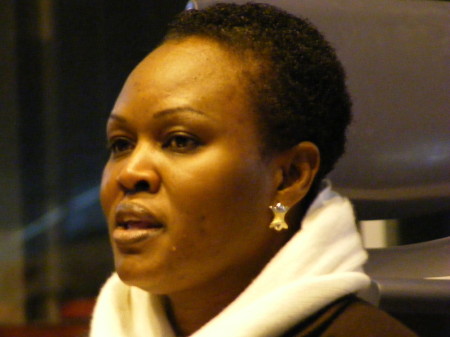 "This is our problem and it's time to take charge," said Mrs Idowu speaking at a Community Safety Evening at the Globe Academy in Harper Road.

The academy was formerly Geoffrey Chaucer School where her son's 16-year-old murderer was a pupil. David Idowu, aged 14, attended nearby Walworth Academy.

Grace Idowu began her address by describing the moment the police broke the news of her son's stabbing to her whilst she was at Tesco.

"How many more after David have lost their lives?" she asked the audience. "We don't want crime any more in Southwark.

She also expressed regret that there were not more parents present at the meeting to discuss the danger of carrying knives.

Simon Hughes MP, taking Northern Ireland as an example, spoke of the great influence women can have for peace.

Turning to young males he said: "Realise that every time you take a risk by taking a weapon you add to the risk."

He also suggested that young people need to make teachers aware of anyone known to be violent or out of control and therefore a potential danger.

Globe Academy principal Jason Baigent, welcoming the guests, said: "There's a lot to be proud of in Southwark. There is a lot we can do together."