A founding member of a Waterloo based youth forum has been recognised nationally in an inaugural list of future leaders. 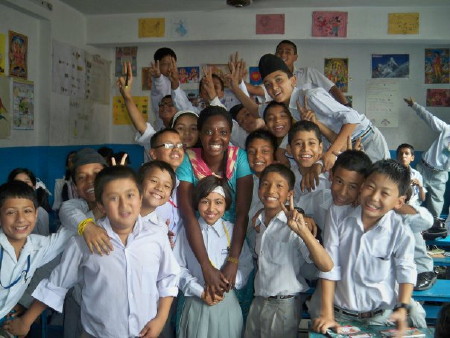 Mwanje raised £4,000 for an English school in Nepal where she taught last year

Melba Mwanje, 20, has been named as one of Britain's 30 most outstanding black students in the Future Leaders 2010 list. The list recognises black and African Caribbean students who have balanced academic success with extra-curricular activities in the hope that they will become the leaders of tomorrow.

Melba was recognised for her work with SE1 United, a youth-led organisation she helped to found in 2003 when she came to Britain from Uganda. Aimed at 10 to 21-year-olds, the charity reaches out to over a thousand young people every year through a range of programmes and activities.

"What has touched me most about being named on the list is it has shown me that I must be making a real difference," said Melba. "People like Winnie Mandela and Michelle Obama – they are who I think of as the black female leaders of today. So to be identified as a leader of tomorrow is as much wonderful as it is scary."

SE1 United is run and managed by a 30-strong committee of young people. It aims to provide a voice for young people and raise aspirations through youth-led projects including homework clubs, work experience, leadership programmes and cultural trips.

All young people living in Waterloo aged 10 to 21 years are automatic members invited to come to large scale events and access free youth support and advice.

Melba is studying Human Sciences at Oxford University and is due to graduate this summer. She plans to complete a master's degree and then take up a post with accountancy firm KPMG in autumn 2011.

A university spokesperson said: "We at the university are so pleased that Melba has been recognised. The Future Leaders list is a real step forward for encouraging black students to be recognised for their achievements."