Shooting victim David King has warned against the dangers of gangs, guns and violent video games. 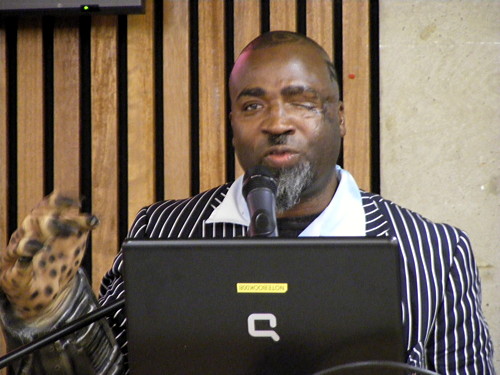 The Waterloo resident was speaking on Monday evening during a shot-gun and knife crime question time held at the Coin Street Neighbourhood Centre.

David King was a well-known 23-year old-boxer who had his promising career abruptly ended when shot at point blank range in 1994. He lost his left eye and was in a critical condition for six months with shotgun pellets lodged in his brain. The attack took place outside a club in East Dulwich.

"This meeting would not have have happened without the incredible persistence of David King," said Vauxhall MP Kate Hoey who chaired the gathering.

Speaking about his near death experience and survival, David said: "It's a miracle that I am even standing and speaking to you."

He recalled when very young steering himself away from a life which could have involved drugs in order to be an amateur boxer first at Bethnal Green and then at the Lynn Club, Britain’s oldest continuing amateur boxing club, in Southwark.

He said that today he wanted to stop violence amongst the younger generation. Giving an account of the shooting he recalled that a witness withdrew her statement following alleged threats.

David's brother James was present at the meeting to call for a reopening of the investigation into the shooting for which there have been no convictions.

Superintendent Dave McLaren of Lambeth Police introduced two officers from the Metropolitan Police Trident unit who reported a drop in gun crime throughout the London Borough of Lambeth. The Trident gang crime command has responsibility for tackling gang violence and the prevention and investigation of all shootings in London.

Jacob Whittingham of SE1 United introduced teenagers and young people who are involved in work or study as well as contributing to youth activities and sport.

Brian Dickens of Community Action Zone, who praised the work of SE1 United, spoke about partnerships and the need for more positive young people inspiring the next generation. But the key issue, he added, was funding.

Kate Hoey, commenting on police budgets, said: "We need to see the way resources are spent."

David King closed the meeting with his own call as 'gun-shot survivor and ex-boxer King David' for young people to find safe solutions.

Representatives of a community organisations, charities and businesses were among those present.