New London Bridge Bus Station could be ready by mid-2012

As demolition of New London Bridge House gets under way, Renzo Piano has made further changes to the design of his 'Gem' building that will replace it. 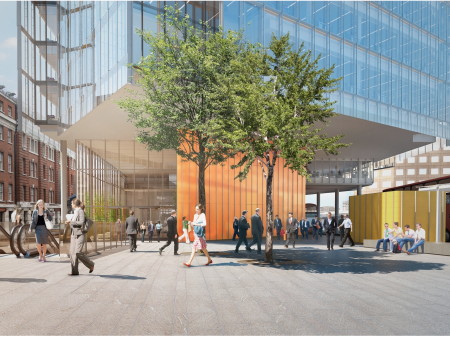 Originally dubbed the 'baby Shard', permission for a large office development was first granted in 2006.

In 2007 a revised scheme was approved by councillors despite misgivings about its less "sexy" design.

In the past few weeks work on the demolition of the existing building on the site – the slender 25-storey New London Bridge House designed by Richard Seifert – has begun in earnest.

The first application is for a revised design for the office scheme west of the Shard and north of London Bridge Street. The second application deals with the new bus station that will be provided at the base of the building.

The London Bridge Place development will provide office accommodation for up to 4,000 employees.

Renzo Piano has said that his ambition here is "to compliment, reinforce and nurture the adventure we started with the Shard and prove we can make this a vibrant new quarter for Londoners".

Planning officer Adrian Dennis told councillors that the scheme before them represented "world-class architecture". He explained that the latest design "will now relate better to the Shard and Southwark Cathedral".

Renzo Piano has reinstated the curved facade that echoes the curve of the railway viaduct. The loss of this curve had been lamented by councillors at the 2007 meeting.

"There is every prospect that by May 2012 the Shard will be complete and at least partially occupied, the bus station, taxi rank and public square will be provided and possibly even London Bridge Place could be under construction," Mr Dennis told the committee.

"The main public transport interchange in Southwark will then be a modern and attractive environment that can be enjoyed by everyone – a very different situation to what we now have."

The bus station will feature a new escalator link to the Underground concourse in Joiner Street, creating an easier link between the two levels of the station.

Jack Carter of the Renzo Piano Building Workshop told the committee that the Italian architect would be paying close personal attention to the detailed design of the bus station: "He wants this to be a comprehensive London Bridge Quarter with his stamp on it".

Councillors pressed the developer and architect on the question of the new shop units to be provided in the bus station and expressed a desire that independent businesses should have a fair opportunity to take on the new spaces instead of the "same old chains, same old brands".

Mr Carter replied: "There is a desire that the atmosphere of Borough Market be brought across the street to this more pedestrian environment."

Transport for London has recommended that Ł2 million from the Shard's section 106 agreement previously earmarked for improvements to the Northern line platform level concourse at London Bridge be diverted to help pay for Crossrail.

TfL argues that Crossrail will help to relieve congestion on the Jubilee line by providing an alternative link between the West End and Canary Wharf, thereby providing a benefit for future occupiers of developments at London Bridge.

Meanwhile work on the Shard itself is continuing apace, with the core soon to reach the height of nearby Guy's Tower.

Bus station plan approved ... but what of the railway station?

Uncertainty still surrounds Network Rail's intentions with regards to the future layout of London Bridge Station as part of the Thameslink Programme.

Speaking after a Westminster Hall debate last month, Simon Hughes MP said: "It was reassuring to hear the minister say briefly that construction works at London Bridge are still due to start in the autumn of 2012.

"Sadly we ran out of time to probe him in the debate and we certainly were given no cast-iron guarantees either from Labour or the Conservatives that if either of them was to win a majority at the next election they would secure the funding for the rest of the work at London Bridge."

A Network Rail spokesman told us that the company "is currently developing detailed plans for London Bridge station taking account of current and known future developments in the surrounding area, together with access arrangements to and through the new station.

"Once these plans are complete later this year a more detailed timeline of what will be required to deliver the programme will be available. We currently anticipate that the Thameslink Programme will be completed in December 2016."