A painting of a disastrous fire in 1832 at the Anchor Brewery on Bankside has been purchased by the Guildhall Art Gallery and is on show till Sunday 11 April. 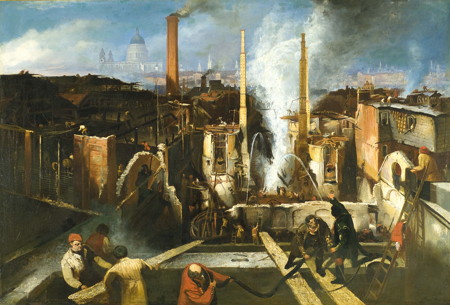 The Burning of the Anchor Brewery by Clarkson Stanfield. Courtesy of Guildhall Art Gallery

The Burning of the Anchor Brewery was painted by Clarkson Stanfield and was purchased last year by the City of London Corporation.

The fire took place on 22 May 1832 when, it is believed, a lamp held by one of the employees of the brewery ignited. As the buildings were made of wood and contained very combustible material such as malt and hops, the fire spread quickly. A number of fire engines were brought in but the firemen and the brewery employees were unable stop the fire burning for many hours.

The Anchor Brewery was established in 1616 by James Monger the Elder and was then bought by Josiah Child who supplied beer to the Navy and named it the Anchor brewery. On the death of Henry Thrale, the owner in 1781, the brewery was sold to David Barclay, of Barclay's Bank fame. Henry Thrale and his wife Hester were great friends of Dr Samuel Johnson, compiler of the first comprehensive English Dictionary and he was an executor of Henry's will.

Henry's brewery manager John Perkins was taken on by Barclays and the business was renamed Barclay, Perkins & Company Ltd. By 1815 it was the leading brewery in London producing 330,000 barrels a year and accommodating 200 dray-horses. Barclay Perkins were the owners of the brewery at the time of the fire.

The brewery was rebuilt and extended after the fire and it was said to be one of the sights of London. Charles Dickens featured the brewery and its beer in his novels and in The Old Curiosity Shop Dick Swiveller describes the porter as having 'a spell in its every drop 'gainst the ills of mortality'.

In 1955 Barclays merged with its rival Southwark brewery Courage at Shad Thames. In 1962 the site became a bottling factory and in 1970 the company was renamed Courage Ltd.

The Anchor Brewery site finally closed in 1981 and the buildings were demolished. The old brewery tap pub – The Anchor Bankside – is still open today and a plaque in Park Street commemorates the site of the brewery.

• See the painting at Guildhall Art Gallery until Sunday 11 April.