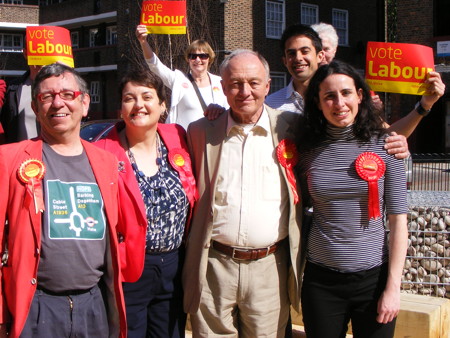 Residents appeared both surprised and pleased to find the former Mayor of London ringing their doorbell on Saturday afternoon.

"We have been knocking on doors talking about the election," said Labour's parliamentary candidate for Bermondsey & Old Southwark Val Shawcross.

"There's been lots of comments about the campaign debate on the TV. Quite a lot of pople are saying: 'We are looking for a prime minister. We are looking for someone who is experienced and that is Gordon Brown.'

"People have been saying to me that Nick Clegg and the Conservative Leader are stylish and personable people and articulate. But what comes across is that Gordon Brown pulled us through the economic crisis and is planning ahead to deliver a better economy for the future.

"People round here are worried about their livelihoods so the issue of the economy will be a very crucial for us in the election."

Chaucer ward Labour candidate Steve Lancashire said that he was finding "some pretty grim housing repair problems" and a lack of youth facilities on the Rockingham Estate.

Afterwards the candidates introduced Ken Livingstone to Pastor Adebo Tomomewo and his colleagues at the Recovery Chapel in County Street.

Chaucer ward is closely fought between Labour and the incumbent Liberal Democrats who narrowly held all three council seats in 2006.

Both parties have been sending activists from elsewhere in the borough to canvass residents in Chaucer ward.