The redesigned Redcross Way, with raised carriageway, trees and cycle parking, has been officially opened. 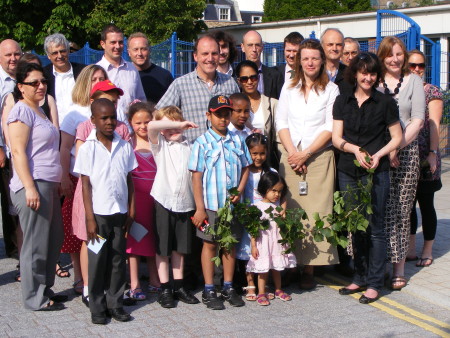 The ceremony, involving a green garland stretched across the road outside Cathedral School, took place on Friday during the May Spring Festival at Red Cross Garden.

Also present was Simon Hughes MP and Cathedrals ward councillor Adele Morris. Children from the school helped to hold the garland before joining in the Maypole dancing in Red Cross Garden.

The improvements to Redcross Way were identified in the Bankside Urban Forest study and funded through Transport for London and section 106 contributions from developers.

Further funding has recently been secured from both Southwark Council's Cleaner Greener Safer scheme and the London Development Agency to implement phase 2 to ensure that the whole of the street from Union Street to Marshalsea Road is upgraded.

• Find out about Bankside Urban Forest plans to transform Flat Iron Square at a public event on Wednesday 26 May.