LSE gets go-ahead for rooftop extension at Bankside House

Southwark's planning committee has unanimously approved an application by the London School of Economics to add an extra 3 storeys to its Bankside House hall of residence near Tate Modern. 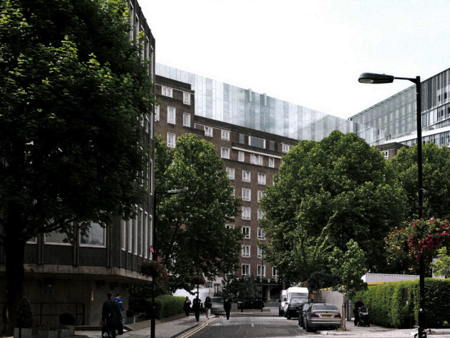 The scheme, designed by TP Bennett, will add 104 extra student bedrooms to bring the total number of rooms to 667.

Bankside House, which was built as an office block for the owners of Bankside Power Station, has been used by the LSE as a student hall of residence since 1997.

The scheme includes a new cafe fronting Great Guildford Street which will be integrated into the landscaping proposed for the street as part of the Bankside Urban Forest programme.

Graham Morrison, architect of the adjacent Bankside 123 development, has complained that the LSE has not taken the opportunity to improve the building's relationship with the increasingly important north-south route along Canvey Street. In a written objection he described the LSE's proposals as "self-serving and un-neighbourly".

He has also described the design by TP Bennett as a "second-rate copy of the Tate 'light box'".

The planning committee heard from Julian Robinson, the LSE's director of estates, who emphasised the institution's long-term commitment to Southwark.

"We came to – and invested in – Bankside 16 years ago, way before it became trendy," he said.

"We are not a commercial student housing provider out to make a quick buck.

"We are a charity and not-for-profit organisation so by owning and running our own halls of residence we can offer subsidised rents well below the market level.

"However, this model does not allow us compete with the commercial sector for land within Central London.

"For example, our Bankside rents range from Ł98.70 to Ł159 a week, whereas those in the [Unite] commercially developed scheme in Great Suffolk Street range from Ł269 to Ł499 per week."

He added: "What you have before you tonight is a home-grown scheme by a socially responsible owner-occupier."

Mr Robinson explained that to open up the Canvey Street side of the building would require major structural works beyond the scope of this rooftop extension project.