The Bishop of London, the Rt Revd Richard Chartres, has planted a yew tree in the gardens of Lambeth Palace to celebrate the UN International Year of Biodiversity. 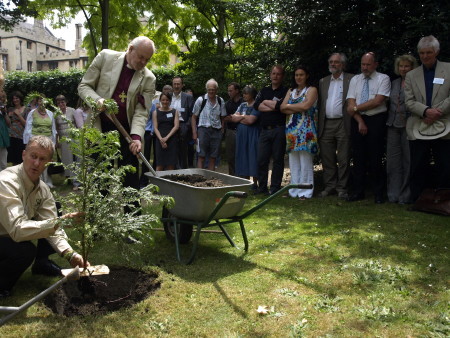 The tree was donated by the Conservation Foundation, which has launched a campaign to find the 7,000 Millennium Yews ten years on, many of which were planted in churchyards.

The planting was part of a national Shrinking the Footprint day at Lambeth Palace for environment officers and other diocesan representatives.

"Planting a Millennium Yew tree in Lambeth Palace Garden is a reminder of the Church's long heritage of caring for God's creation and its commitment through Shrinking the Footprint to the International Year of Biodiversity," said Bishop Richard.

The Conservation Foundation and The Ancient Yew Group are pressing for yew trees over 500 years old to be given formal protection with a tree preservation prder (TPO).

The campaign will be piloted in the Canterbury, Rochester and Southwark dioceses which together have 118 veteran and ancient churchyard yews between them.

Lambeth Palace is the London residence of the Archbishop of Canterbury.