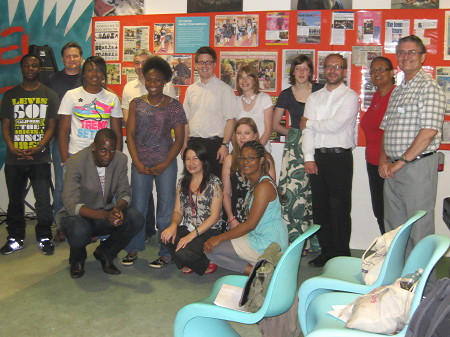 As part of their annual staff training conference, a team of 11 came to listen to the views of people involved at the cutting edge.

"They came to us as they wanted to find out more about what their members do and why and what their needs are," explained SE1 United trustee Abigail Tripp.

Three young people then described what SE1 United means to them; Timi, 18, said: "For me, SE1 United is a family, I'm 50 per cent SE1 United and 50 per cent my own family. If it wasn't for SE1 United I wouldn't be sitting here today."

19-year-old Roberta added: "Whatever your issue, we can help; you can come to us."

Aisha, aged 16, said: "SE1 United has helped me with school work, putting on a fashion show and going to Egypt made me see I can do anything, all things are possible."

Ify came to work with SE1 United through the Future Jobs Fund and says: "On day two I had to do a presentation at a national conference, then they gave me a camera and said make a film, these were two things I'd never done before but they gave me the confidence and tools to just go and do it. Even though I finish next week, I'm going to come back in my own time and join in."

Director of projects Natalie Bell says that consistency is the secret of SE1 United's success: We've had consistency, the same staff since the beginning eight years ago, there's so much loyalty to us, young people go to university for three years and then come back to help.

"However, because we are so completely youth led and therefore flexible, we find it difficult to get public funding as they want targeted projects with particular groups of young people whereas we work with everyone.

"We struggle to get sustained, long term funding to support us because funding is often for new ideas and projects, not for what works consistently."

NCVO's head of marketing and membership Gillen Knight summed it up saying: "You should be funded – if you got your young people in front of a room full of rich donors, they'd open their wallets!"