Southwark Cathedral padlocked the gates of All Hallows Garden in Copperfield Street on Monday morning as local residents continue to campaign against plans to redevelop the adjacent former church building. 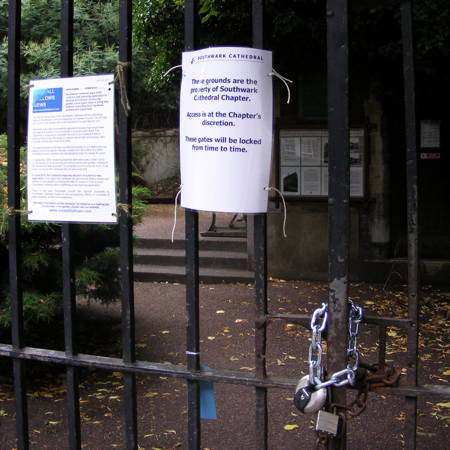 The gates to All Hallows Garden on Monday morning 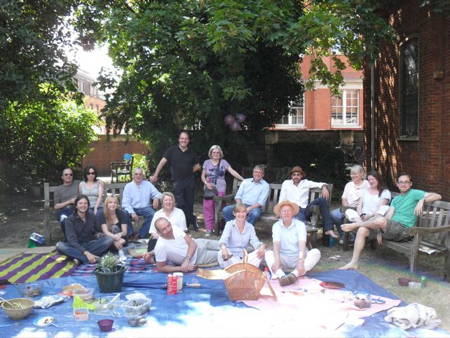 It is more than five years since Southwark Cathedral, which owns the All Hallows site at the junction of Copperfield Street and Pepper Street, first revealed its plans to develop the former church building and adjacent hall.

Planning applications were rejected in 2005 and 2007 following fierce opposition by nearby residents worried about loss of light and an increased sense of enclosure.

Revised proposals were presented at two bad-tempered public meetings last summer. A couple of months later the Save All Hallows campaign presented their own counter-proposal for the site.

Now the cathedral chapter has exercised its right to close the garden by locking the gates and preventing access to the much-loved green space.

Signs attached to the gates now say that "access is at the chapter's discretion".

"The chapter has told the residents' campaign group repeatedly over an extended period of weeks that, on occasions, the gates will be locked," a cathedral spokesman told the London SE1 website.

The spokesman declined to give a date for the reopening of the garden, which recently won a bronze award in the Southwark in Bloom competition.

"The occasional closing of a private open space is not unusual and this is what the chapter has done," he said.

"The chapter looks forward to offering members of the public similar access to the Copperfield Street site, along similar lines to that of previous years, in the future."

The cathedral insists that when the adjacent building is redeveloped the garden will still be accessible to the public but the cathedral authorities will take over the management, maintenance and security of the site, which has been tended by local residents on an informal basis for many years.

"The chapter has worked hard to accommodate residents' comments but has a duty to make the best possible use of this property as a resource for the work of the cathedral," said the spokesman.

"The plans include a worship space and housing for the cathedral's canon pastor but have not yet been made public as the council has yet to formally register the application.

"They will be made public as part of the consultation process which accompanies planning applications. At this stage the plans will also appear on the cathedral website."

Last month Simon Hughes MP – who has admitted to "falling out" with the the cathedral's dean, Very Revd Colin Slee, over the future of All Hallows – joined a community picnic in the garden as part of the nationwide Big Lunch event.